Days ago, “Extra’s” Terri Seymour spoke with Jessica at the Los Angeles premiere, where she explained how Justin got involved in the show.

Biel noted that it was “his idea” to play a deputy investigating real-life accused killer Candy Montgomery, played by Jessica.

Biel recently opened up about working with her man during a Zoom interview with “Extra’s” Jenn Lahmers. She said, “It was so much fun. I was a little nervous at first. I wasn’t sure if I was going to feel, you know, fully confident to just kind of do whatever I wanted or needed to do, but I felt the opposite, I felt at ease, and it was peaceful. He’s just so fun to be around.”

Biel produced the series, which is ripped straight out of the ‘80s. In real life, Montgomery was charged with murdering her lover’s wife after striking her 41 times with an axe.

The trial lasted eight days, but the jury deliberated for only four hours, acquitting Candy of murder, buying her argument that the killing was in self-defense.

Of the verdict, Biel told Jenn, “I wasn’t in the jury. It’s fascinating, and we’ll never know the answer.” 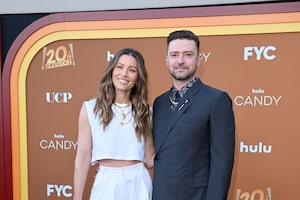 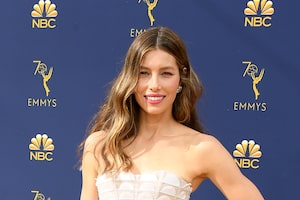