In February, Tiger Woods was involved in a scary car crash, which left him with severe leg injuries.

After several leg procedures, Woods is walking again, with the help of crutches and a leg sleeve.

In video obtained by TMZ, Woods is seen arriving in Los Angeles via private jet with his girlfriend Erica Herman. After stepping off the plane, he is seen walking with a noticeable limp.

The reason for Tiger’s trip is Los Angeles is currently unclear.

Woods recently opened up about his road to recovery, telling Golf Digest, “This has been an entirely different animal. I understand more of the rehab processes because of my past injuries, but this was more painful than anything I have ever experienced.”

Woods suffered multiple breaks and an open fracture from the accident. 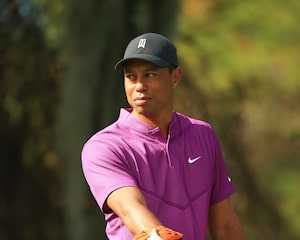 He added, “My physical therapy has been keeping me busy. I do my routines every day and am focused on my number one goal right now: walking on my own.”

When asked if he will golf again, Woods dodged the question, saying he’s “taking it one step at a time.”

Woods shared a photo of himself on crutches in April, telling the magazine, “It’s funny because, in that photo, the crutches definitely make my shoulders look big! Maybe it’s the workouts, too. It’s been nice having the ability to still stay strong and work out my upper body.”

“Extra’s” Billy Bush recently spoke with Dr. Jonathan Gelber, who predicts that Woods will be out for at least a year before he can return to the golf course.

In 2019, Gelber released a book “Tiger Woods's Back and Tommy John's Elbow: Injuries and Tragedies That Transformed Careers, Sports, and Society,” which detailed how his past injuries affected his career. 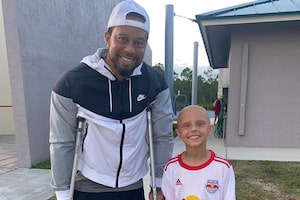