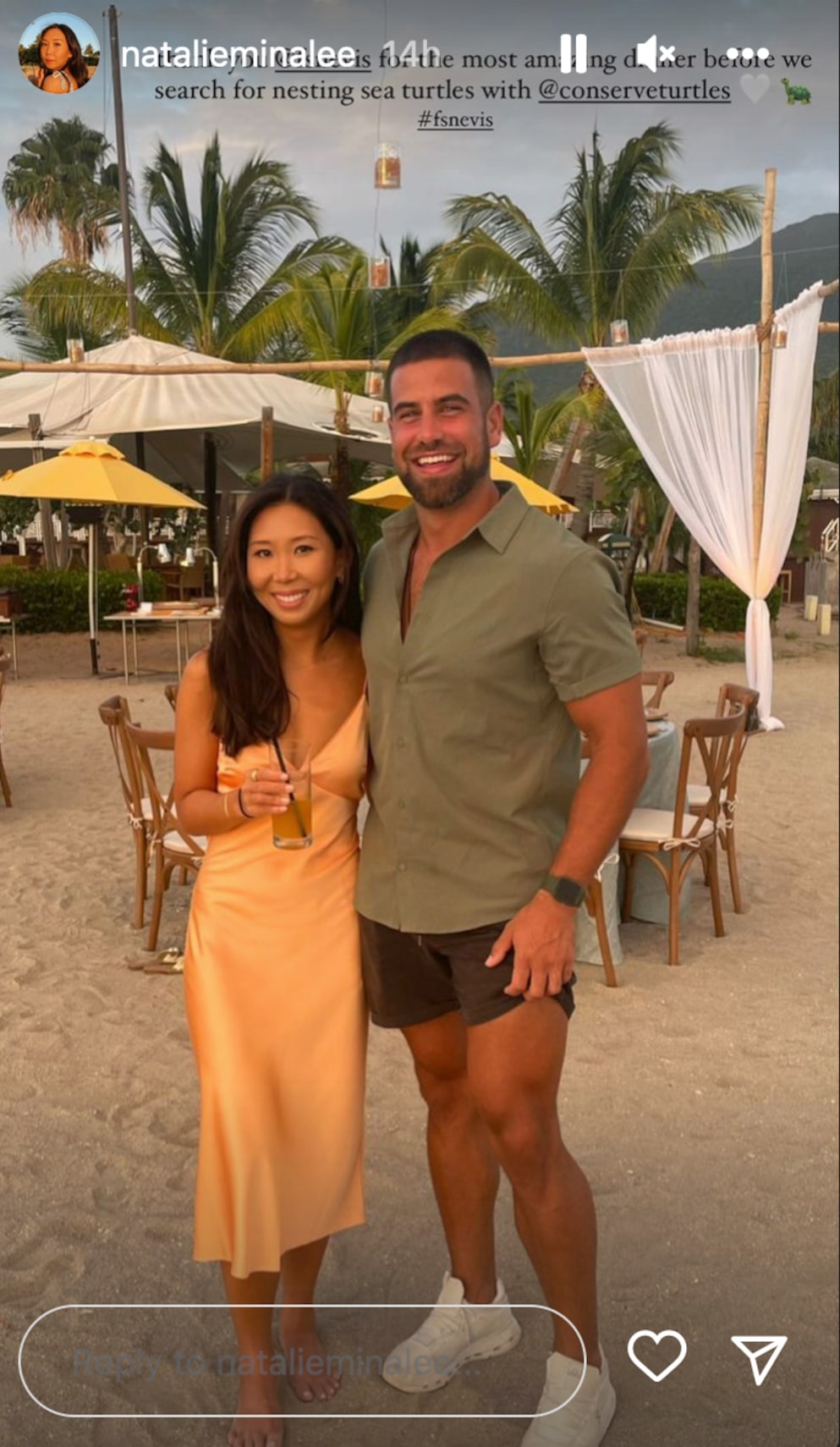 “The Bachelorette” alum Blake Moynes and “Love Is Blind” star Natalie Lee have everyone talking!

They are enjoying each other’s company during a turtle conservation trip in the Caribbean.

On Monday, they shared photos of each other in their Instagram Story.

In one selfie, Natalie quipped, “The crossover nobody asked for @blakemoynes.”

Natalie shared a photo of them from a dinner hosted by the Four Seasons Nevis. She wrote, “Thank you @fsnevis for the most amazing dinner before we search for nesting turtles with @conserveturtles."

In another Instagram Story, she joked that her “favorite part” has been the “meaningful conversations” she’s had with Blake on their breaks. She included a video of the two sitting in silence.

Moynes posted a photo of himself and Natalie smiling while posing with a sea turtle. He also documented their “breakfast date,” captioning the video, “She LOVES sea turtles. And wants to be a turtle barnacle in another life."

Moynes was previously in a relationship with Katie Thurston, but they split in October.

Lee called it quits with Shayne Jansen after they were unable to make it work on the second season of “Love Is Blind.”

In March, “Extra’s” Katie Krause spoke with Natalie, who insisted that the “door is closed” on her relationship with Shayne.

When Katie noted that her DMs are probably going crazy with possible suitors since she’s “single,” Natalie quipped, “I haven’t seen any, but no, I don’t believe that.”

He added, “They start to question things and this happened a couple months ago where they weren't into what I was doing. They didn't love me showing my face all the time on Instagram, which is a downfall."

Blake also noted that he hoped to meet someone through his conservation efforts. He said, “After this recent trip I did, there were some women on this trip that worked in the conservation space and I realized it would be really cool to find someone who is aligned with me in that part of my work. I thought these women were just so attractive in the way they handled things and their passion for this stuff made me want to be around people like that more."

While it looked like Blake and Natalie hit it off, a source told Page Six that it’s just “platonic” between the two. They said, “This was the first time Blake and Natalie met. [Blake] thinks she’s great. Right now things are completely platonic but you never know what the future holds!”