On Monday, Benedict Cumberbatch felt “very good” to celebrate “Doctor Strange in the Multiverse of Madness” at the Hollywood premiere!

“Extra’s” Jenn Lahmers spoke with Benedict, who hinted that they were “blowing the doors of the multiverse open” in the movie.

Benedict shared, “I can’t wait to watch it with an audience and this audience because we’re bringing it home and it’s a really exciting episode in the MCU.”

He teased about his character, “Strange is reaching new perilous heights and dizzying changes to him.”

Cumberbatch expressed his excitement in seeing the audience’s reaction to the end of the movie. He said, “It was a lot of hard work and this is the bit where we get to sit back and hopefully enjoy how it goes down.”

He called it “enjoyable challenging” to play multiple versions of Strange, saying, “He’s a complex enough character as it is and then they throw those variants at me to do and you know, whether it’s just creating a slightly new look or just figuring out what the same but different is about him.”

Benedict went on, “It was fantastic and it’s sort of wish fulfillment in many ways… whether it’s ourselves and the multiple lives we lead… in this universe or multiverse.”

When asked if he could describe the multiverse in 10 seconds, he used one word… “complicated.”

“It’s stuff that goes on in parallel to our timeline in a multitude of never-ending universes,” Benedict elaborated.

“Doctor Strange in the Multiverse of Madness” hits theaters May 6. 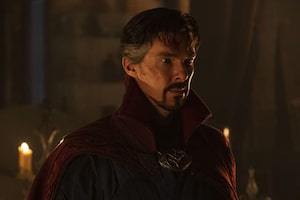 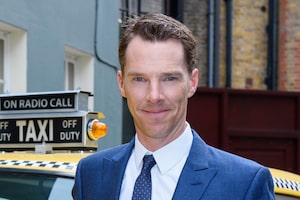