In case you haven’t heard, The Weeknd seemingly has a new girlfriend, Simi Khadra, who just happens to be friends with not just one, but two of his exes!

On Thursday, Selena Gomez posted a picture of her with the DJ duo Simi and Haze Khadra. Along with a series of pictures with Simi, “The Only Murders In the Building” actress captioned it, “Since 2013” followed by a blue heart emoji. The pictures featured Selena with the DJ duo hugging and smiling.

Gomez isn't only hanging out with Simi, she's also having some fun on TikTok with Cara Delevingne. They recently tried to tie cherry stems with their tongues. Watch!

Days ago, Simi and The Weeknd were spotted kissing as they celebrated “Blinding Lights” singer’s 32nd birthday at Delilah at the Wynn Las Vegas. At the party, they were joined by his friend, Drake who made a toast to honor the birthday boy.

In his toast, Drake mentioned how, "We’re celebrating one of the greatest artists of all f--king time. My brother from day one, and I’m grateful not only to be here with my brothers but that the family is back together where we belong from the greatest city in the world. Straight, big six Toronto. At the end of the day we are here for one man and I want everyone to enjoy their life on behalf of my brother Abel."

Other artists who attended the celebration included Swedish House Mafia and Kaytranada. 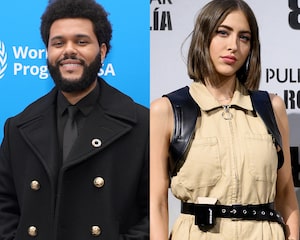 Many fans were confused to see the new couple together as she is close with not only Selena, but Bella Hadid as well, another one of his exes.

It doesn’t look like Selena and Simi are not letting a man come in between their friendship.

Sadly, the same cannot be said about his model ex Hadid, who unfollowed the twins’ joint Instagram account, following the news of The Weeknd and Khadra cozying up with each other.

Rumors of the new couple started even before being seen at his birthday bash, they were spotted out on several dinner dates throughout Los Angeles earlier this month.

Weeks before their kiss, a source insisted that Simi and The Weeknd “were not dating.” They told E! News, “They've been friends for years."

Hadid and the “Save Your Tears” artist dated first in 2015 before breaking up about a year and a half later. They got back together again in the summer of 2018 before calling it quits once again a year later in August 2019. Some of his songs even appeared to be inspired by their relationship! 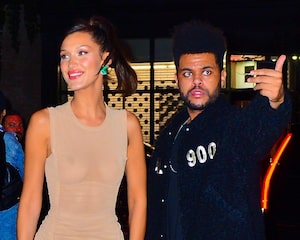 Gomez dated the Grammy winner after his first split from Hadid from January to October 2017. She shared some kind words after their breakup, saying “I truly have never experienced anything like that in my life. We ended it as best friends, and it was genuinely about encouraging and caring [for each other], and that was pretty remarkable for me.”

Prior to Simi Haze, the Weeknd, whose real name is Abel Tesfaye, was linked to actress Angelina Jolie after being spotted grabbing dinner with her a few times.

The Weeknd had everyone wondering if he was singing about Angelina in his song “Here We Go… Again.”

While Jolie is never mentioned by name, she is a mega movie star!

However, a source denied the rumors and told E! News that the two “have mutual interests and are enjoying putting their ideas together to see what they can come up with. They have been recently talking about partnering on a few humanitarian projects together. He loves talking about movies and the art form."