James Corden is bracing himself for the end of his run on “The Late Late Show” in 2023.

Days ago, “Extra” caught up with James at New York’s 92nd Street Y, where he predicted what will happen next year when he bids farewell to the show after eight years.

He admitted, “I’m gonna cry my eyes out.”

“I think when we come back in the new year, it’s gonna start to dawn on me,” Corden pointed out. “We want to try and make the best shows we’ve ever made and be able to look back on it and go, ‘Wow, we really did a thing there for a minute.’”

James and his family are heading back to England, something he really began to think about during the COVID-19 lockdown. He commented, “It really gathered pace during the pandemic, not being able to travel home suddenly made us feel aware of how far we are away.”

Corden also dished on his family Christmas plans in the U.K.! He dished, “I’m just looking forward to sitting with my sisters and falling into our regular yearly habit of essentially just drinking our body weight in booze.”

While Corden is ending his late-night TV run, we’ll still see him on our TV screens!

He’s starring in the binge-worthy Prime Video series “Mammals,” in which he plays a chef who discovers shocking secrets about his pregnant wife.

Corden is “thrilled” with the audience’s reception to the show. He added, “The great thing about the show is you can watch the entire thing in two hours and 41 minutes. It’s actually shorter than ‘The Batman.’”

James has no plans to say goodbye to Hollywood for good. He noted, “We would like to come back to America, but we feel like it’s probably time to reconnect with some people that we’ve been a long way away from and know that that is time with them that we can never get back.” 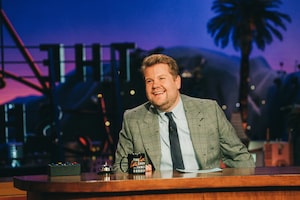 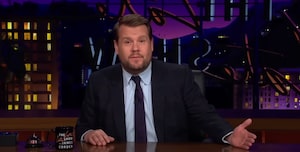 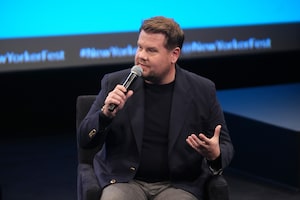