“Bachelor in Paradise” alum Tia Booth and her fiancé Taylor Mock are parents for the first time!

On Wednesday, the couple announced the birth of their baby boy, Tatum Booth Mock, who was born the day before.

Along with an audio post, they called it the “best day of our lives.”

In October, Tia revealed that they had already agreed to a name for their son. She told People magazine, “Baby boy has a name! Well ... he has a first name. The middle name is harder than we thought."

At the time, she hinted that the baby will “have the initials ‘TM.’”

On Father’s Day, Tia announced that she was pregnant.

Along with reflecting on the loss of her dad in February, Tia wrote on Instagram, “This has undoubtedly been my most challenging season thus far. I've never felt such overwhelming sadness and pure joy at the same time. It's been difficult to be grateful for the good as if one of the most important people in my life is missing the celebration."

She went on, “While I wish I could tell my dad all the good news in person, it brings me peace that he knows about it long before I do. Welcoming a new little life while mourning the loss of another proves that high emotions can exist simultaneously, and I have no doubt my dad had a hand in this."

Eight months ago, Taylor popped the question to Tia at a “Bachelor Live on Stage” event after about a year of dating. 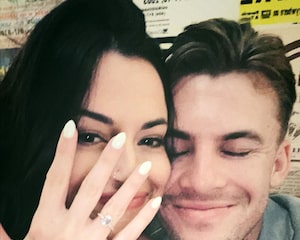 After the proposal, Tia gushed, “Never been more shocked or sure in my life. I love you so much Tay, my FIANCÉ!!!

Tia appeared on Arie Luyendyk Jr.’s season of “The Bachelor.”