TMZ reports Jackson accepted a plea deal for his crimes and received 21 years in prison.

The L.A. County D.A.’s office told the site that Jackson pleaded no contest to attempted murder but did admit to inflicting great bodily injury.

In April 2022, James was accidentally released due to a clerical error but was later apprehended.

James was one of five people arrested after the shooting, and prosecutors believed he was the one who shot Ryan during the altercation.

In February 2021, the group pulled up to Fischer in a car and kidnapped Lady Gaga’s French bulldogs Gustav and Koji.

Two more defendants, Harold White and Jennifer McBride, were accused of being accessories. They pleaded not guilty and were released after posting bail. According to TMZ, the status of the other defendants’ cases is unknown.

McBride was reportedly the woman who “found” the dogs and returned them to Gaga, and White is Jaylin’s father. Police claim that all but McBride were documented gang members. 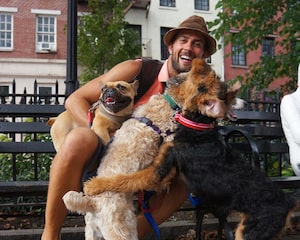 In October 2021, Fischer testified in a secret grand jury proceeding, recalling the terrifying dognapping. In an unsealed grand jury transcript, obtained by Rolling Stone, he said, “They pointed down to the dogs, that they wanted the dogs, and I said, ‘No.’ And I started to scream for help and tried to fight back.”

When one of the robbers started choking Fischer on the ground, he hit the man with a bottle of champagne he’d just purchased.

He revealed, “The dog screamed at me, and I reached for [Koji], and then the guy, the man with the gun shot me as I was reaching. I immediately tried to call for help but realized I was bleeding out of my lung and that I was losing more and more air quickly.”

According to Fischer, the bullet went through his lung.

Following the attack, Fischer had to have part of his lung removed. He said, “The top third of my lung being removed as well as the bottom portion.”

Fischer is still struggling with “breathing issues.” He explained, “When I go from the ground up to stand, I have to, I still get very close to passing out. So I have to take a moment with that.”

Fischer had previously opened up to “CBS Mornings” Gayle King about how Gaga helped him through his recovery.

“She’s been a friend for me,” he said. “After I was attacked, my family was flown out, and I had trauma therapists flown to me. And I stayed at her house for months while friends comforted me and security was around me.”