On Tuesday, the pair tied the knot in front of their close friends and family at the Dreams Natura Resort in Cancun.

Shay told People magazine, “I just wanted us to have a good time with every person who is important to us.”

Ariana, Raquel, and the two Toms were part of the wedding party.

Davies stressed, “They’re a big part of our life.”

Davies’ family from Australia also traveled a long way to attend the wedding. Shay stressed, “I just wanted as much of Brock’s family and friends to be able to be here because, although this is the second marriage for us both, this is his first wedding. For me it was just really important to make this as special as possible for him and his family.”

Shay pointed out, “The fact that that many people came on vacation with us is so cool. I feel like it’s a small wedding in scale, but it’s big for a destination. I want this special moment. Brock deserves this. We deserve this.”

Scheana and Brock’s 16-month-old daughter Summer was their flower girl.

While they did practice throwing the petals together, Scheana said, “[Summer] would be adorable no matter what.”

As for how they decided on their wedding venue, Scheana said, “They had everything I wanted: the glass platform over the pool, a lazy river, a little waterpark. It was family-friendly and it just felt right. We needed something that would be good for her and also fun for our guests.”

For their big day, Shay walked down the aisle in a custom gown designed by Pol’ Atteu. She shared, “I love that we have designed this from scratch together and the lace is absolutely stunning.”

For their first dance, the pair showcased their dance moves to Leon Bridges’ “Beyond.”

The pair got engaged last summer. 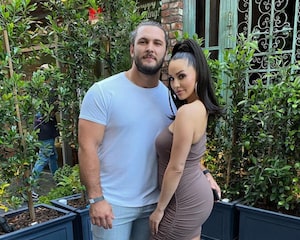 Engagement rumors began when Shay, 36, stepped out in L.A. wearing some new bling on her ring finger.

The couple appeared to be celebrating at Craig’s with “VPR” co-stars James Kennedy, Raquel, and Ariana.

An insider dished, “Brock and Ariana kept grabbing Scheana’s arms and looking super happy and excited for her... Scheana looked really happy and her and Brock look really in love. They were cuddling at the table and laughing the entire night.”