Anne Heche is lucky to be alive following a fiery crash Friday, and is currently intubated while recovering from burns.

People reports the actress was upgraded from critical to stable condition.

The outlet interviewed neighbors who were on the scene of the Mar Vista accident, and they said Heche was conscious but in bad shape in the aftermath. 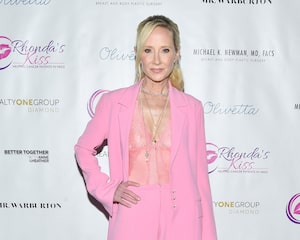 People talked to Lynn Bernstein, a local resident of over 40 years, who said he and others were on the scene when the car "almost immediately" burst into flames. One bystander got into the backseat and spoke to Heche, who reportedly told him she "wasn't doing real well."

Unfortunately, the men couldn't free her from the wreckage on their own. She remained trapped until the Los Angeles Fire Department arrived.

"We were having a hard time seeing and breathing," Bernstein said. Another man, named Dave, was "overcome by the smoke. So, he went to the back of the house to see if there was an alternative route, maybe we could get to her from the front of the vehicle. But the smoke, even on the backyard was pretty darn intense."

The resident, who had reportedly just left the room into which Heche crashed, escaped injury, as did her dogs and a pet turtle.

Previously, TMZ had reported that Heche first crashed into a garage, reversed, and sped off, eventually running a stop sign at an intersection. It was then she plowed through privacy bushes and into the home.

The LAPD is investigating the incident.

Heche's former longtime love, actor James Tupper, tweeted, "Thoughts and prayers for this lovely woman, actress and mother tonight," posting an image of a smiling Heche with their 13-year-old son Atlas. "We love you."

Heche is also the mother of 20-year-old son Homer from her marriage to Coley Laffoon.