Eminem’s daughter Hailie Mathers is ready for the spotlight!

On Tuesday, Hailie announced her new podcast “Just a Little Shady.” She wrote on Instagram, “This project has been in the works for a while & i’m so excited for the first episode to be launching!”

Mathers will be co-hosting the podcast with a friend. It will be Hailie’s take on “life, pop culture” and will “get a little shady.”

It is to be determined if Hailie’s famous dad will make an appearance!

The announcement comes a month after Mathers filed a trademark for the podcast under her company name Hailie Jade LLC.

Court papers obtained by The Sun suggest Mathers is planning to sell merchandise like “hats, shirts, and clothing jackets."

While Hailie has been keeping a low profile over the years, she boasts 2.7 million social media followers. 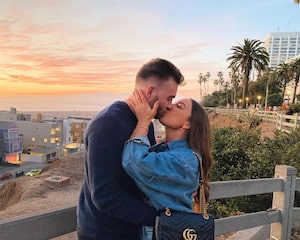 Hailie posted a pic from a box at the SoFi Stadium. Referencing Rams quarterback Matthew Stafford, she wrote on Instagram, “Here for the halftime show, staying for Stafford.”

Last year, Stafford was traded to the Rams after playing 11 seasons with the Detroit Lions.

Hailie was joined in the family box by her cousin Alaina Scott, who posted a pic of herself with fiancé Matt Moeller. She wrote, “Came to the concert to watch a little bit of football. repping Detroit and supporting Stafford, let’s goooo.”

In the 2000s, Eminem adopted Alaina from her biological mom Dawn Scott, the twin sister of his ex-wife Kim Scott.