After months of dating, “The Bachelorette” alum Blake Horstmann and “Love Is Blind” alum Giannina Gibelli have gone public with their relationship!

Earlier this week, they made it Instagram official while promoting their Paramount+ show “All Star Shore.”

Along with posting a series of photos, Blake wrote on Instagram, “Happy…Just so damn happy ❤️ @gianninagibelli/ If you are wondering how the hell this happened 😂 tune into @allstarshoreofficial on @paramountplus starting today 🍾."

Giannina also shared her own series of photos. She wrote, “My worst kept secret ❣️ See why I have been so happy this year on @allstarshoreofficial @paramountplus."

Last week, Giannina gushed about her beau, telling People magazine, “He's just such a genuine person, and he's just a delight to be around that I genuinely wanted to get to know him and to be around his energy, and he felt very comfortable. Within the first couple of hours of meeting him, we were already next to each other, like Velcro. We were like sticky tape, all the time."

They were friends first before things became romantic. She went on, “I think it's safe to say that we weren't shy about how we felt for each other and how comfortable we were. During the show, you'll see some people being like, 'Get a room. Can you please figure this out over there? I miss my boyfriend. I miss my husband. You're making me jealous.'"

Romance rumors had been swirling about Blake and Giannina since January. 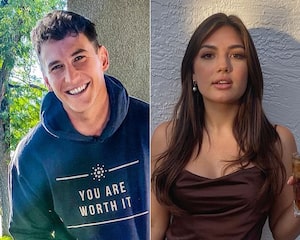 At the time, a source shared, “They're taking things slow. But [they] seem really happy together."

Another insider revealed, “Blake and Giannina met filming a competition series for Paramount+ that includes reality stars from around the world on shows like ‘The Bachelorette,’ ‘Jersey Shore,’ ‘Love Is Blind,’ [and] ‘RuPaul's Drag Race.’ On the series, they will battle it out for a cash prize."

Giannina was previously engaged to Damian Powers, who she met on the first season of “Love Is Blind.”

Blake appeared on Becca Kufrin’s season of “The Bachelorette” and “Bachelor in Paradise.”