Rosie O’Donnell, 60, has just gone public with her new relationship!

On Wednesday, the first day of Pride month, Rosie made it Instagram official with her girlfriend Aimee, whose last name she has not revealed.

In the pic, Aimee has her arms wrapped around Rosie.

A few weeks ago, O’Donnell had everyone talking about her love life when she posted a photo of two people’s hands intertwined.

It is unclear how long they’ve been dating.

Last year, Aimee opened up about growing up Mormon in Boise, Idaho, while on the “Lesbian Speaking” podcast.

Aimee revealed that it took a long time for her to come out due to her religious upbringing. She has two children.

O’Donnell was previously engaged to Elizabeth Rooney, but they called it quits in 2019. 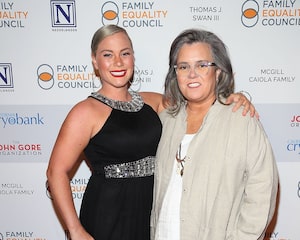 In 2020, Rosie gave an update on her dating life, telling “Extra’s” Rachel Lindsay, “I'm single. I'm not dating. I'm in the pandemic hold… Yes, I'm just like, 'Hold for the pandemic.'”