Jimmy Kimmel was in tears Wednesday night as he spoke about the mass shooting at Robb Elementary School in Uvalde, Texas, that left 19 children and two adults dead.

Speaking to the camera,without an audience present, Jimmy said, "Once again, we grieve for the little boys and girls whose lives have been ended and whose families have been destroyed. While our leaders on the right, the Americans in congress and at Fox News and these other outlets warn us not to politicize this.”

He insisted, “Most Americans support keeping guns out of the hands of criminals and children; the majority of us do, Democrats and Republicans,” adding, “The reason they call them common-sense gun laws is because that's what they are… common sense.” 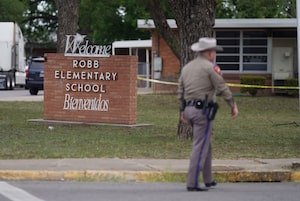 Celebrities React to Uvalde Shooting — Matthew McConaughey: 'We Must Do Better'

Jimmy brought up how other countries have responded to mass shootings, saying, “Twenty-six years ago, Scotland had a school shooting that killed 16 kids and the teacher and the government responded by enacting gun control legislation, and there hasn't been a school shooting in Scotland since then. In 1996 in Australia, a mass shooting killed 35 people. They passed gun legislation. They haven't had one since, This is the only country where this keeps happening. Firearms are now the number one cause of death for American children and teens. Number one.”

He also shared a message with lawmakers like Texas Senator Ted Cruz, Texas Governor Greg Abbott and others, saying, “It's okay to admit you made a mistake. In fact, it's not just okay, it's necessary to admit you made a mistake when your mistake is killing the children in your state. It takes a big person to do something like that. It takes a brave person to do something like that and do I think these men are brave people? No, I don't, I don't but man, I would love it if they surprised me.”

Getting emotional, Kimmel added, “There have been 27 school shootings so far this year in this country and it's May. How does this make sense to anyone? These are our children. And our representatives are supposed to represent us.”

Jimmy asked viewers to take action in the voting booth, saying, “It doesn’t matter what party we vote for, we all care about this. We need to make sure that we do everything we can to make sure that unless they do something drastic that let’s make sure that not one of these politicians ever holds office again.”

Kimmel later learned that his monologue had been cut short in Dallas, and tweeted, “To my friends in Dallas who are asking: I do not know whether our @ABCNetwork affiliate

@wfaa cut away from my monologue tonight intentionally or inadvertently but I will find out,” and included a video of his full monologue.

WFAA’s director of digital content Pete Freedman responded back, "We'd made the decision earlier in the day to extend our 10 o'clock news to include extra Uvalde coverage in our broadcast, it had nothing to do with your monologue. We're on the same team." He later added, “I'll personally ensure we share your monologue again on our website in the morning.”