Barron Hilton, 32, and his wife Tessa Von Walderdorff, 27, have another baby on the way!

The couple are expecting their second child. They are already the parents of daughter Milou Alizee, who is almost 2.

They told People magazine, “We are so excited! It wasn't planned, but we've realized that the best things in life never are. We have decided to wait until the baby's birth to discover the gender."

“The baby is due at the end of summer, which will make Milou and baby exactly 2.5 years apart,” the couple noted.

Both babies are due in summer! Nicky and Barron’s sister Paris has also been open about her desire to have children, so we’ll have to wait and see if she has news on that front to announce! 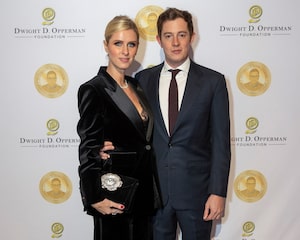 In 2020, Barron and Tessa opened up on how they came up with the name Milou for their first child. They shared, “We found the name Milou from where we met — Pointe Milou in [St. Barts]. We thought it was only fitting.”

Barron and Tessa tied the knot in St. Barts, two years after meeting on the island.

St. Barts is also where Tessa’s parents’ wed. She told Brides.com, “I’ve been going to the island since I was a baby. My parents got married there in 1988, exactly 30 years ago. It has always been my happy place. I would have never imagined that one day the island would introduce me to the love of my life

While Barron is the son of hotel moguls Richard and Kathy Hilton, Tessa is a descendant of Germany royalty.

Barron popped the question to Tessa in the summer of 2017. She revealed, “Barron and I had spent a good month and a half apart traveling on our own—but when I returned to New York, he was awaiting me. From that moment on, we could no longer leave each other’s side. Two weeks later, he proposed.”

Of the proposal, she gushed, “Once we got onto the Ferris wheel, Barron pulled out a letter he had written me while I was gone, recounting all of our memories together. After doing a full circle on the wheel, he finished his letter, and I don't know how he could have possibly timed it so perfectly, but when we got to the top the second time, he got down on one knee, with a green, velvet box in his hand, and asked me to marry him."