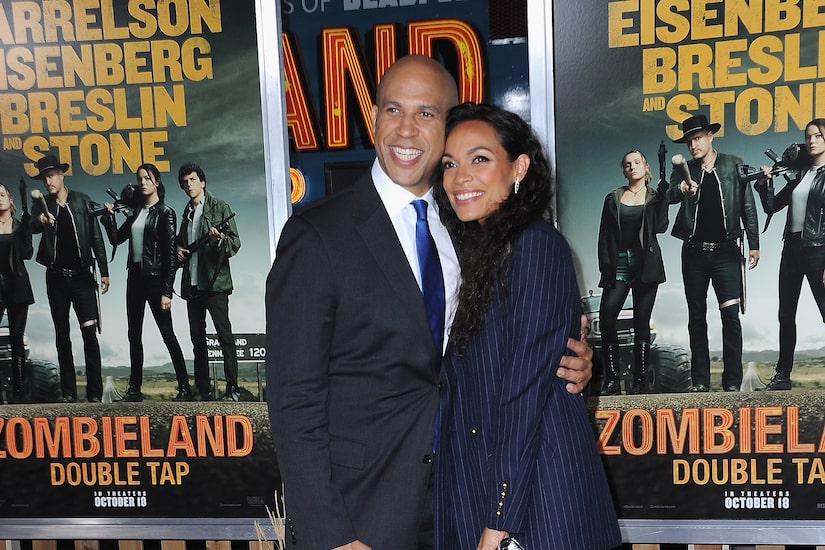 A source close to Booker confirmed the split to People magazine, saying they remain good friends despite their split.

The pair met at a political fundraiser in 2018 and confirmed their relationship in March 2019.

Romance rumors started flying after they stepped out for a performance of “Dear Evan Hansen” in NYC.

At the time, a source told Page Six, "They were so cute together and seemed so flirtatious.”

Dawson confirmed their relationship in early 2019. When TMZ photogs at a Washington, D.C., airport asked her about dating Booker, she said, “So far, so wonderful. He's a wonderful human being. It's good to spend some time together when we can."

That same year, Booker opened up about their relationship to The Washington Post. He shared, “I mean, gosh, that night we talked for hours and hours. I had trouble asking for her phone number... I think I said something really stupid like, 'Uh, how would I get in touch with you?' And she mercifully said something like, 'Oh, you want my phone number?' And my insides were like, 'Hell, yeah!'"

Dawson also commented on their relationship to the paper, calling the politician “so charming,” “confident,” and “capable.”

She noted, “It's not like that translates to being some super-smooth kind of guy. That's not his style.”

Dawson brought attention to his sense of humor, saying, “What wins me over with him is definitely the dad jokes.”

“Extra” caught up with Rosario, who dished on his sweet romantic gestures to her when they were apart. Along with revealing her pet name for him, She said, "I call him Cab, but Cory sends me a song every day we're not together, and it's just stuff like that where I'm sort of like, 'He is so romantic and beautiful.'”

She continued, “I'm just amazed and excited and blown away by my  relationship with this wonderful man and his relationship with me and my  family. We're starting that whole thing of putting it out into the  greater world. Sometimes it makes me sweat a little bit… right now, I'm  just so grateful for my family and grateful for the love of my life.”

As for Cory raving about her in interviews, Rosario commented, "It has meant a lot to me to know he's running for the highest public  office in America and he's still centering us in our relationship and  prioritizing, ya know, creating our foundation.” She added, “It's the  idea that we can show up for anything that we really want to show up  for… and it means a lot to me that in the midst of all of that he's  always showing up for us."

The pair became serious, with Rosario eventually moving in with him. During the COVID-19 pandemic, they lived in his Newark, New Jersey, home. He told Buzzfeed in the fall of 2020, “This is the first time in my life I've really lived with somebody — and obviously Rosario and I are enjoying and adjusting to that.”

He added, “I have not done that, really, as a bachelor, where I actually sit at a table and just, like, breathe and eat a meal. And just set a table — I can't tell you how rarely do I set the table as a bachelor, you know, as a guy living alone. So it's just really nice to set a table, have somebody to say grace with, before a meal. It's just those small things really are, I'm finding, incredibly enriching."

Along with eating together, Rosario and Cory were “cooking together a lot more.”

He pointed out, ”Literally, she just bought a food processor, a Cuisinart thing, for our kitchen yesterday. So I'm very excited about just expanding my capability to make delicious, healthy, whole plant-based food at home."

Last year, Rosario was Cory’s date to President Joe Biden’s inauguration at the U.S. Capitol. At the big event, Cory sported a mask from her company Studio 189.

When Booker defended his Senate seat, Rosario gushed on Instagram, “So proud of and grateful for you my love. I got to vote for you here in New Jersey and am so glad that you overwhelmingly and rightfully won your seat again. To know your leadership will continue to guide us with love, brilliance, patience, grace and effectiveness is the kind of representation and hope we need."

A few months ago, Dawson reacted to Chris Redd’s impression of her beau on “Saturday Night Live.”

Rosario didn’t think “SNL” got ‘him right.” She explained to TMZ, “Sometimes the impressions are really spot-on for folks and I just keep feeling like they're missing it… I'm really looking forward to someone doing an impression that actually really comes off like Cory. So I'm throwing it out there, a little idea: He's literally like the Ted Lasso of the Senate, so maybe do something that's kind of a spin like that?"

Redd has played Booker seven times on the show.

She also praised Booker’s work on cannabis justice and police reform, suggesting that the show could do “a whole spin on him trying to jump on the most things and be the most effective for his community.”