Adele has just dropped her new music video for “Oh My God.”

The music video reunited Adele with director Sam Brown, who helmed her music video for her smash hit “Rolling in the Deep.”

After the video was released, Adele wrote on Instagram, “I got to work with Sam Brown again for 'Oh My God' who directed the 'Rolling In The Deep' video! So to collaborate together again a decade later was nostalgic to say the least. We filmed this one on the day Easy On Me dropped, there were a million things going on all at once. But the attention to detail from the crew was borderline hilarious - thank you so much for your patience and pulling it all together it was a lot of fun 🙏🏻 Although right at the end a huge python was on set so I skidaddled my arse straight out of there! Big thank you to Harris Reed, Louis Vuitton and The Queens Haus - Vivienne Westwood for the most stunning clothes for me to sing my 'I'm a hot mess' song in! ♥️”

The video features multiple Adeles surrounded by dancers, with chairs serving as a major backdrop!

In the video, a chair is eventually set on fire… which could signify that Adele is ready to move on from her past? At one point, Adele is seen sitting next to the burning chair, which could mean that she’s become stronger and can withstand the heat!

Chairs have been a prominent in her other videos, too: she’s sitting in one in “Hometown Glory,” “Rolling in the Deep,” and “Easy on Me.”

In Adele’s song “My Same” from her first album “19,” Adele made reference to chairs, singing, “I like to sit on chairs and you prefer the floor.”

In her new music video, there are dancers lying on a mattress on the floor.

The beginning of the music video begins with an apple sitting on a chair and ends with Adele eating an apple. In the song, she sings, “I know that it's wrong / But I want to have fun,” so could it be an Adam and Eve reference about eating the forbidden fruit?

Adele also sings about “spinning out of control,” which could explain the disorder and chaos with the dancers in the video.

Months ago, Adele opened up about the song, telling Audacity that it was "about the first time that I basically left my house after my anxiety and stuff like that started to sort of subside.”

“I went out with some girlfriends and my girlfriends are like, ‘You’re single, 30, and ready to mingle.’ And I was like, ‘I ain’t ready to mingle at all. What the hell are you talking about?’ It was just about the prospect of sort of dating and stuff like that in bloody L.A., which is not the vibe," Adele elaborated. "I was terrified, I wasn’t ready to start dating anyway, but I was scared that if I did, that I would probably make some really bad decisions because I wasn’t ready. I remember the first time [someone flirted], and I was like, ‘Do you mind? I’m married.’ And my friends were like, ‘But you’re not.’ And I was like, ‘Oh, s***. Okay. Oh, my God.’” 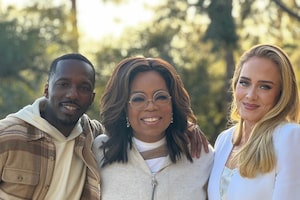 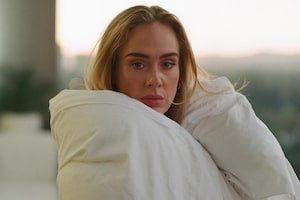