Reality star Jana Duggar, 31, has run into some legal trouble.

In court documents obtained by People magazine, Jana was charged September 9 with endangering the welfare of a minor.

Duggar has pleaded not guilty to the misdemeanor and will appear in court for a bench trial next month.

If convicted, Jana could be sentenced to 30 to 90 days in jail, The Blast reports.

The news comes just one day after her brother Josh Duggar was found guilty on child pornography charges.

After he was convicted on two charges of receiving and possessing child sexual abuse material, his parents Jim Bob and Michelle shared a message on their website, writing, “This entire ordeal has been very grievous. Today, God’s grace, through the love and prayers of so many, has sustained us.”

They added, “Our hearts and prayers are with anyone who has ever been harmed through [child sexual abuse material].”

Speaking of Josh’s wife Anna and seven children, Jim Bob and Michelle wrote, “In the days ahead, we will do all we can to surround our daughter-in-law Anna and their children with love and support. As parents, we will never stop praying for Joshua, and loving him, as we do all of our children. In each of life’s circumstances, we place our trust in God. He is our source of strength and refuge. Thank you for your prayers.” 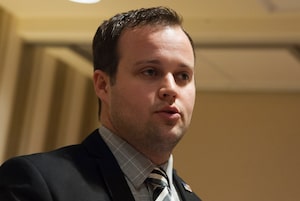 Josh’s sister Jill and her husband Derick Dillard also posted a statement that said, in part, “Today was difficult for our family. Our hearts go out to the victims of child abuse or any kind of exploitation. We are thankful for the hard work of law enforcement, including investigators, forensic analysts, prosecutors, and all others involved who save kids and hold accountable those responsible for their abuse.”

They later added, “We have been lied to so much that we wanted to hear the evidence for ourselves in court. After seeing all the evidence as it was presented, we believe that the jury reached a just verdict today, consistent with the truth beyond a reasonable doubt.”

People reports Josh now faces up to 20 years in prison and a possible $250,000 in fines on each count. His sentencing will take place in four months, but a date has not been set.