"Who's the new addition to the family?" Britney Spears asks in a cute new clip posted to fiancé Sam Asghari's Instagram — and the newcomer is a sweet doberman pup! 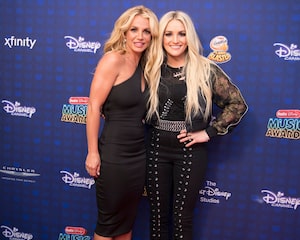 Asghari, in a sleeveless shirt and a cap with an American flag on it, holds the dog as he says, "Her name is Porsha and she's meant to unconditionally love you and it's gonna be trained to protect you from any motherf---er who comes around you with bad intentions."

"Hi, Porsha!" Britney chirps at the end of the clip, captioned, "Surprised my fiancé with our newest member to the Family ❤️ Porsha #doberman #homesecurity."

A pet dog was recently at the center of a controversy for Spears, 39, when she was accused of smacking a phone from a housekeeper's hand during an August 16 argument. Though the housekeeper filed a report with the authorities, legal charges were dropped and Britney won't face criminal charges, either.

Spears and longtime BF Asghari made their engagement official with a September 12 announcement.