“The Bachelor” host Jesse Palmer has been keeping a big secret!

Last summer, Palmer, 42, tied the knot with his model fiancée Emely Fardo, 35, at a friend’s home in Connecticut.

The couple told People magazine, “We were only able to invite a small group of close friends that live in the greater NYC area, and that were in quarantine at the time. We had a lovely afternoon and look forward to celebrating our love with our parents and immediate families all together soon!"

Jesse and Emely were originally planning to get married in Provence, France, but were forced to postpone and then cancel, due to the COVID-19 pandemic.

“Big or small, wedding party or not, we feel so grateful and lucky to have found each other!” the two stressed.

A few months ago, Emely hinted that they were married by using the hashtag “husband.” She wrote on Instagram, “Happy anniversary to us!! I love you more than I love cheeseburgers! ❤️😆 #amorzao #anniversary #husband.”

Fardo has also posted several photos of herself wearing a wedding band like ring on that finger. 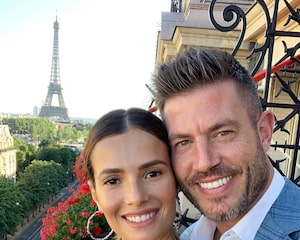 In July of 2019, Palmer popped the question to Fardo in France. At the time, he gushed to DailyMail.com, “I've been so enamored, so in love with this woman, and it only has grown. I'm head over heels for her.”

After spending two days in Paris, Jesse took Emely to Champagne, where he would go down on one knee with a 3.5-carat diamond ring.

Champagne holds a special place in the couple's hearts, since it was where they had their first vacation. He explained, “I decided to propose somewhere meaningful, a place that was familiar to us. I decided this was the place.”

In 2017, Jesse and Emely met at a boxing class in NYC. He revealed, “I saw her and thought she was beautiful. I didn't meet her until later, she was coming in while I was leaving. We ended up connecting and our first date was at Rumble two weeks later.”

While Palmer has found love, he’ll be helping an eligible bachelor find the one on the next season of “The Bachelor.”

Last month, it was announced that Palmer would be hosting the 26th season of “The Bachelor.” In a statement, Palmer said, “For more than 20 years, ‘The Bachelor’ has brought the world dozens of unforgettable love stories, including at one time, my own. Falling in love is one of life’s greatest gifts, and I am humbled by the opportunity to return to the show as host this season to offer the newest Bachelor advice gained from firsthand experience and I am grateful to play a small part in his journey.” 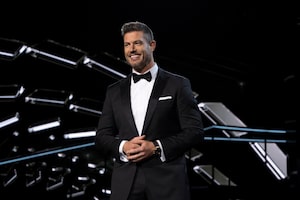