“The Bachelor” alum Jesse Palmer, 40, is taking the next big step with Brazilian model Emely Fardo.

Over the weekend, Palmer popped the question to his girlfriend of two years in France. He told DailyMail.com, “I've been so enamored, so in love with this woman, and it only has grown. I'm head over heels for her.”

Jesse planned the surprise trip to Paris himself. He shared, “We had a week off of work so I booked tickets to Montreal and let her think we were staying 10 days at my home there. On Monday morning I surprised her and said, 'Pack your bags, we're going to the airport.' When we got to the terminal, she realized we were going to Paris.”

After spending two days in the City of Light, Jesse took Emely to Champagne, where he would go down on one knee with a 3.5-carat diamond ring.

Champagne holds a special place in the couple's hearts, since it was where they had their first vacation. He explained, “I decided to propose somewhere meaningful, a place that was familiar to us. I decided this was the place.”

Palmer started shopping for the ring in February. The DailyMailTV host dished, “I was trying to find the right one she would like. I wanted to get the ring shape, setting and band right. She said I knocked it out of the park.”

Palmer even took Portuguese lessons so he could say parts of his proposal in Portuguese.

Emely also shared photos from their engagement shoot, writing on Instagram, “We're engaged! My heart is so full❤️❤️ I feel so lucky to have found the love of my life!! We're so happy and excited for this next chapter of our lives!'

Jesse posted on Instagram, “I'm so lucky to finally call you my fiancé. I asked for an angel to be brought into my life...and it was you.”

More than two years ago, Jesse and Emely met at a boxing class in NYC. He revealed, “I saw her and thought she was beautiful. I didn't meet her until later, she was coming in while I was leaving. We ended up connecting and our first date was at Rumble two weeks later.'

He gushed, “She has taught me, cares for me like no one else. She has made me be the best version of myself. She loves me unconditionally."

The couple is taking time to enjoy their engagement. While they have “some ideas” about their dream wedding, he pointed out, “We've only told our families and close friends, so we are excited to share the news with everyone and then start planning.”

Fifteen years ago, Palmer appeared on Season 5 of “The Bachelor,” giving the final rose to Jessica Bowlin. They split less than a month after the finale. In a statement to “Extra,” he said, “Jessica and I shared an incredible romantic journey on the show that began with a friendship that remains strong today. We simply realized that, individually, our next steps take us in different directions.” 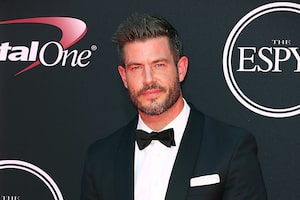