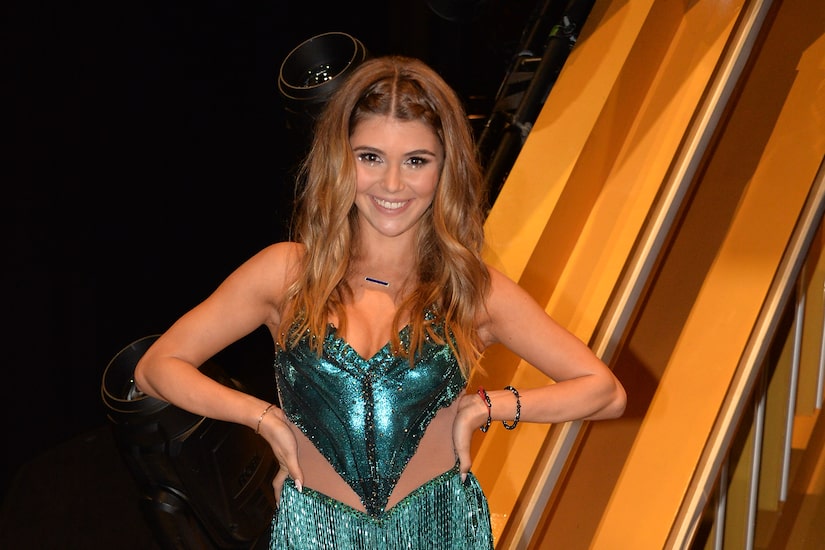 Earlier this week, Olivia Jade Giannulli and her “Dancing with the Stars” partner Val Chmerkovskiy performed a Viennese waltz for their second dance, earning a score of 27 out of 40.

Now they’re getting ready for dance number three, and only “Extra’s” Jenn Lahmers was with them at rehearsal!

Olivia said, “What I think is important is how much fun I’m genuinely having.”

She added, “I’m definitely going to keep dancing. I’ve told my family this already. They’re like… ‘How’s it going?’ I’m like... ‘I wish you would’ve put me in a dancing class when I was a baby.’ I’m having so much fun.”

There’s more fun and other new beginnings for her family too, as her mom Lori Loughlin is getting back to acting by reprising her role as Abigail Stanton on Season 2 of “When Hope Calls.”

When Jenn commented, “I know that you signed on to the show to open a new chapter in your life, and you’re killing it on the dance floor. Your mom is back to work. That’s gotta feel pretty good, right?”

Olivia just celebrated her 22nd birthday, and her dance partner was in on the fun. “Val brought me a big 22 cake… It’s cookie cake, actually. With some roses on there,” she shared. Val pointed out, “It was delicious.”

She added, “It was a great birthday. It was very chill. I was so tired from the show on Monday… that I went home and went to bed.” Val quipped, “She’s getting older, know what I mean?”

This coming Monday, Olivia Jade and Val will be performing the tango to Britney Spears’ hit song “Hold It Against Me.” Britney Night comes just days after the singer scored a court victory against her father, Jamie, who was suspended as her conservator after 13 years in the role.

Olivia weighed in, saying, “I’m in support of Free Britney,” adding that she hopes Britney “has a little bit more control over her life” in the future.

Back on “DWTS,” Val is competing against wife Jenna Johnson and her dance partner JoJo Siwa for the Mirrorball Trophy, saying, “I’ll think about Jojo and Jenna in the finals… Until then, I’m focused on us.”