Kelly Osbourne is now a mom!

Kelly’s mom Sharon Osbourne confirmed the baby’s arrival during an appearance on the UK version of “The Talk.”

Sharon revealed that the baby’s name is Sidney. She added, “[They're] just so, so great. So great.”

"When my son lets me, he doesn't let me do it too much because I spoil the kids too much and he has to deal with them when I drop them off!"@MrsSOsbourne opens up about life as a grandparent and says daughter Kelly and grandchild Sidney are doing "so great". pic.twitter.com/B50D246bto

According to Sharon, Kelly has no plans to share photos of Sidney. She said, “She won't let a picture go out of him. No, and I'm so proud of her."

After Sharon’s comments on “The Talk,” Kelly posted on Instagram, “I am not ready to share him with the world. It is no one’s place but mine to share any information on my baby.” 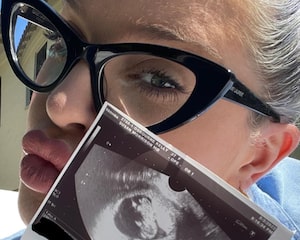 Kelly announced her pregnancy in May.

Along with photos of her ultrasound, she wrote, “I know that I have been very quiet these past few months so I thought I would share with you all as to why… I am over the moon to announce that I am going to be a Mumma. To say that I am happy does not quite cut it. I am ecstatic! 🤰💜.”

It is unclear when Kelly gave birth but in November, she posted a cryptic Instagram Story, writing, “Okay, here we go.”

Along with a pic of his newborn daughter Maple in a bear onesie, he wrote, “Aree and Maple are doing great and are happy and healthy.”