Nearly a year after “Tiger King” star Joe Exotic filed for divorce from Dillon Passage, he is officially single!

According to court documents obtained by TMZ, a judge has signed off on their divorce in Santa Rosa County, Florida.

Last year, Joe filed for divorce, noting that the marriage was irretrievably broken. 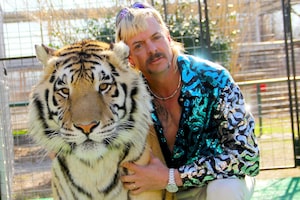 He requested alimony in the form of a lump sum and asked that his name be restored to Joseph Allen Maldonado.

Joe got his wish and his name has been restored.

The pair had been estranged for a year before Joe’s filing.

Dillon moved on from their relationship, making it Instagram official with his boyfriend John.

He wrote on Instagram, “I’ve planned on keeping my relationship private for personal reasons but lately I’ve been having a hard time dealing with things happening in my life and John has been my rock and helping me get through it all.”

Exotic is currently serving 22 years in prison for hiring a hitman to kill his arch-enemy Carole Baskin, and for animal abuse.