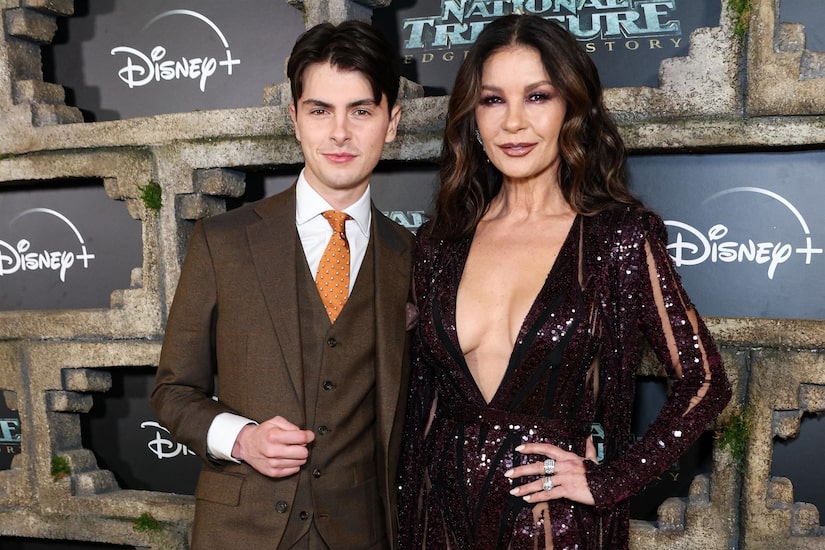 Catherine Zeta-Jones and her son Dylan hit the red carpet Monday night for the “National Treasure: Edge of History” premiere at the El Capitan Theater in Hollywood.

Dylan, whose father is Michael Douglas, said of attending the event, “It’s fun. It’s great to see her at work and look so beautiful. She looks great around the house on a Saturday afternoon.” Catherine joked, I don’t,” adding, “I’ll take it.”

He added, “I was a huge fan of the Nic Cage series ‘National Treasure.’”

Melvin asked Dylan if he ever gives his mom feedback. The 22-year-old answered, “She is an Academy Award-winning actress, so I don’t think my feedback is necessary. She gives me feedback and most of it is very, very good.”

What is the best advice Catherine has given Dylan? He said, “Be yourself… and if people like you, they like you, and if they don’t, they don’t, but always be yourself and always be true to yourself.”

Robert asked how the family will spend the holidays, and Catherine said, “Together,” adding that Michael has been busy filming in Europe “so he’ll be back, so we’re just going to be PJs and having a great time.”

The series premieres December 14 on Disney+.