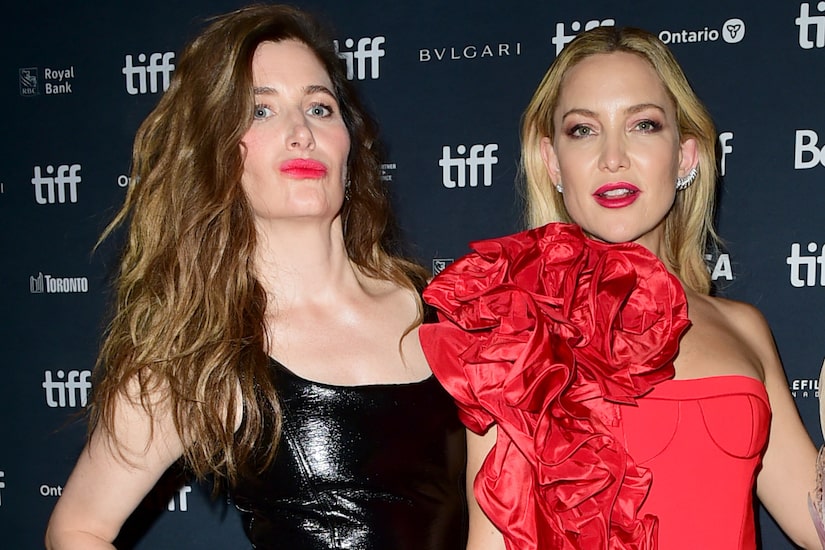 Kate Hudson and Kathryn Hahn, who first worked together on “How to Lose a Guy in 10 Days,” are reunited in “Glass Onion: A Knives Out Mystery”!

“Extra’s” Melvin Robert spoke with Kathryn and Kate, who reflected on the upcoming 20th anniversary of the classic rom-com and recalled Kathryn’s hilarious audition mishap.

Kate shared about Kathryn’s “How to Lose a Guy in 10 Days” audition, “Kathryn showed up to the audition of ‘How to Lose a Guy in 10 Days’ and I was reading with her and we were reading for the girlfriends, and she came in and we started to do the scene and her phone went off, and she was like, ‘Oh God, you know’ and she’s getting the phone… She answered the phone. She was like, ‘Hello, Patrick, I have to call you back.’ I looked at Lynda Obst. We’re all like, ‘It’s Kathryn Hahn. She’s a comedic star and she doesn’t even realize what she is.’”

Kate joked that they’ve had “such a love affair” since starring in that movie together.

Hudson stressed the importance of having “connections” with fellow actors, especially in an ensemble comedy like “Glass Onion: A Knives Out Mystery,” where co-stars need to feed off energy from each other. She added, “When you have a great partner in that, it just not only makes the time more fun, it elevates everything.”

Kate noted that actors try to make it “feel effortless and fun” on these movies, saying, “When you have the ability to do that with someone, it just changes the whole dynamic.”

Hudson pointed out that she’s been able to have that connection with Hahn “twice,” with “Glass Onion: A Knives Out Mystery” and “How to Lose a Guy in 10 Days.”

Of the one time they played Mafia on a hotel rooftop, Kate said, “I actually have the footage of me rolling Kathryn around on a tray cart.”

“Kathryn did do a dance that spanned many floors of the hotel,” Kate went on. “Somehow she danced into the elevator and left the parking and then came back.”

Kathryn chimed in, “They were watching, as in ‘Silence of the Lambs,’ what floor [I] was gonna come out on.”

Hudson commented, “Daniel [Craig] and I were laughing so hard. It was funny.”

Kate and Kathryn praised the cast for having a “wonderful sense of humor” and being “generous.”

“Glass Onion: A Knives Out Mystery” is in theaters November 23.