Over the weekend, Jacobs popped the question to Kufrin while they were at the beach in Ojai, California.

His proposal comes five months after she popped the question to him.

Becca told People magazine, “The thought, care and excitement that he put behind his proposal meant the world to me. He prepped for weeks to get it ready. Apparently he took pictures of the ring with me in the background and was able to show it to most of our friends and family beforehand so most felt included. It was so cute to see him in that moment. But I never thought he’d actually propose after I just got done stabbing a pumpkin and had pumpkin guts under my fingernails!”

She added, “We are so excited! It’s time we can finally start wedding planning.”

Becca announced their engagement in late May.

She wrote on Instagram, “In the ultimate plot twist ... HE SAID YES! We’ve been keeping this secret just between us and close family & friends for a while but we’re so excited to shout it from the rooftops!” 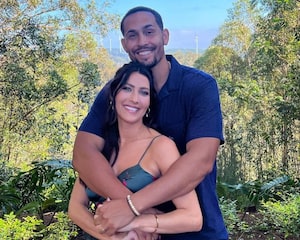 She and Jacobs, 29, each flaunted their rings in dueling posts, which also featured their dogs Minno and Leo.

“I finally found my chauffeur for life and the one who makes my heart smile every single day. I can’t wait to do it all with you Tommy, thanks for making me the happiest gal alive. I love you to the moon & back,” she went on.

Jacobs referred to her proposal as “the ultimate UNO reverse card / power move.” He wrote, “You keeping me on my toes for a lifetime has a great ring to it. Cheers to forever Boops.”

The engagement marks Kufrin’s third link to the “Bachelor” franchise: She was engaged to Arie Luyendyk Jr. (“The Bachelor”) and to Garrett Yrigoyen (“The Bachelorette”). She met Jacobs on Season 7 of “Bachelor in Paradise,” but they broke up on film. They got back together after shooting wrapped, and the rest is history.

“Extra’s” Rachel Lindsay spoke with Becca after her proposal. She shared, “It just came to fruition… I knew he was also planning something and he still wants to propose, so I didn’t want to take away from that… but I was like, ‘I wonder if he is going to beat me to the punch?’” She added, “I didn’t get down on one knee but asked him to marry me on May 15.”

Becca also revealed some of the negative responses she got from haters after the engagement. “There has been some comments of people saying, ‘That’s not right’ or ‘She’s desperate’… Logically, that thought process doesn’t make sense to me, so I just tune them out, I just tune all the haters out… I knew from a public standpoint people were going to be like, ‘What the heck? That’s so different.’”

Just months ago, the pair bought a home in San Diego. She posted on Instagram, “Officially co-home owners! Tommy is my new roommate and Minno & Leo are our new tenants. Let’s fill this home with so many laughs, meals, memories, and maybe a couple babies.”

Thomas added, “So, got a new forever roommate today. Please don’t kill me when I tear up the house over the next 3 months.”