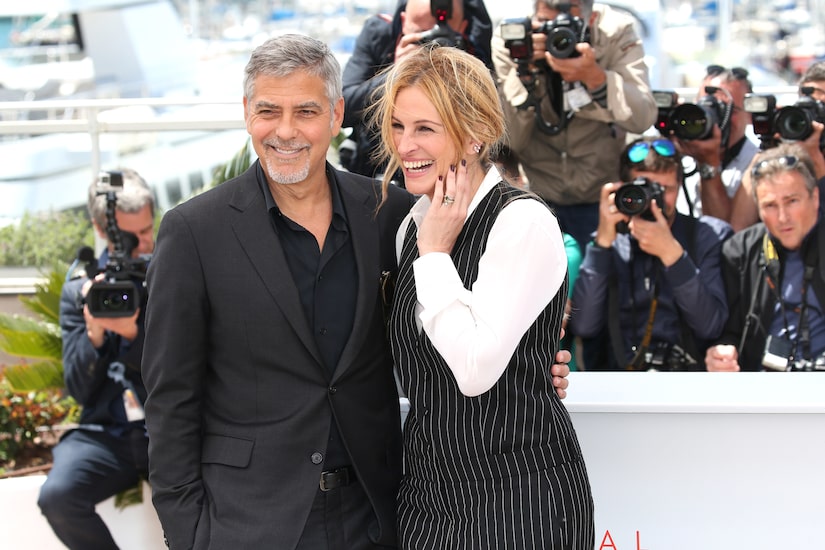 George Clooney and Julia Roberts are starring together in the new movie "Ticket to Paradise."

“Extra’s” Billy Bush sat down with the on-screen power couple and off-screen Hollywood BFFs, who took a trip down memory lane, remembering their first meeting.

Julia shared, "It was with [Steven] Soderbergh, it was at the Chateau [Marmont], ‘cause that was where I was staying."

Julia, George and Steven first worked together on the 2001 hit "Ocean's Eleven."

Julia commented, "It was surprisingly, immediately comfortable, familiar. We were sitting on the floor... There was just an ease."

George noted, "We didn't really rehearse. We just sat on the floor and talked."

When asked if they had any preconceived notions about each other, Julia answered, "George is what you expect him to be... There's nothing that really surprised me except I was so completely at ease."

Julia joked, "Was?" She added, "Is there something you're gonna tell me? What happened?"

George reflected, "Walking in the door, it is intimidating. It's funny — it really was easy from the very beginning."

Clooney revealed that their hijinks began "right away."

George elaborated, "Each room had a bucket of water above the door… It was really crazy."

"Richard Kind came over to visit me… They brought us one of those rollaway beds… Julia and Matt were over… He falls asleep… We take him and roll him into the elevator and leave him in the casino," George dished.

Billy recalled the time Julia pulled one over on him at the Oscars, where she asked if he was going to buy her a drink when they were at the bar.

When Billy asked what she would like to drink, Julia told the girls near the bar that he was buying drinks for them!

Billy noted, "Six, seven women down the line... It was an expensive night, but she got me pretty good."

Julia commented, "Thank you for making a gentlemanly fool out of yourself, Billy Bush."

In "Ticket to Paradise," Julia and George play a divorced couple who travel to Bali to try to stop their daughter's upcoming wedding to a man she just met.

George was able to bring his family to the shoot. He said, "Amal and I got to go there with the kids. Because of the schedule and the sun going down, we were able to finish and then pick up the kids in a golf cart and pick up Julia, who will not leave the house."

Julia shared, "I would just be sitting in the back of the golf cart when they came out going, 'Hi! You ready?'”

George chimed in, "Even the kids are like, ‘Enough already.’"

Jokes aside, Clooney had a lot of fun shooting the movie. He recalled, "Julia would be in the house down below ours and in the mornings, I would be like, 'Caw, caw!' and she would come out and make a weird bird noise... and then go get coffee."

The movie also features a shirtless scene with George. While Billy and Julia complimented him for looking good, George quipped, "You know what? You get a certain age and it's a head replacement."

Julia is even ready to start campaigning for George's next Sexist Man Alive cover!

Julia answered, "I think it's the love of a good woman."

When Billy added that Italian food might have something to do with it, George said, "I will say, every summer when we go to Italy, we eat well. It's a good way to eat."