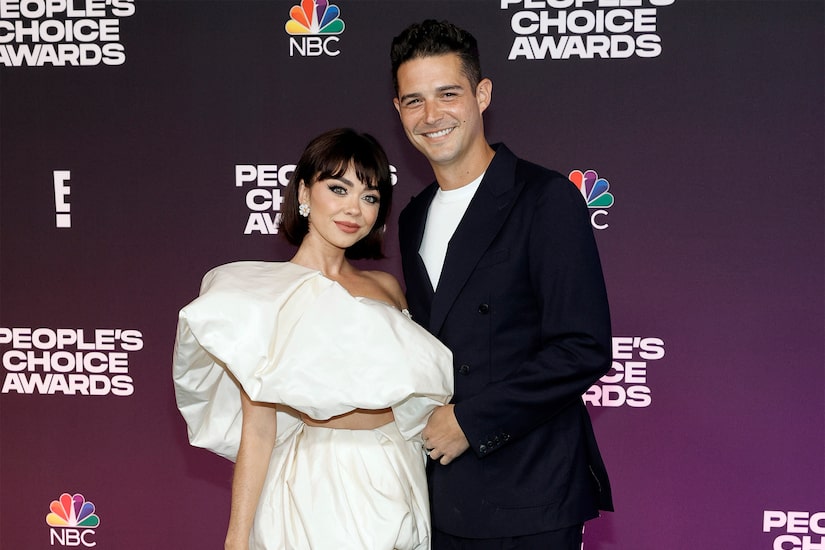 Wells Adams is back on “Bachelor in Paradise,” but he has already found his happy ending, marrying Sarah Hyland over the summer!

“Extra’s” Katie Krause spoke with Wells just over a month after they got married.

Showing off his wedding ring, Wells said, “I can’t stop playing with this ring… I’ve never been a jewelry person and now I have this ring and I, like, I’m always playing with it… It’s the weirdest thing in the world… I mean, I know that’s not the most romantic answer, but, like, I don’t know. The ring’s weird… Like, I look down and I see it and it, like, makes me excited and I play with it and stuff.”

Adams added, “And that’s, like, the thing that changed the most… I feel like for me, because we always felt like we were married… I mean, we’ve been living together for the past, you know, 4.5 years. So yeah, not much has changed other than, like, I have jewelry now.”

Will Sarah take his last name? He answered, “I think that, like, professionally she will be Sarah Hyland because that name is iconic now, you know… 15 years of working in the business… erased by my stupid last name? But I do think that there’s a world in which she takes my last name for like, travel purposes, like, so it’s not a pain in the butt to, like, board together on planes and things.”

Sarah’s “Modern Family” co-star Jesse Tyler Ferguson officiated their wedding. Wells raved, “He was so funny, and one of the things that I remember most is that, you know, during the ceremony, you’re supposed to be looking directly at, you know, your wife-to-be, and I kept like looking over and like laughing at all Jesse’s, like, little bits… all his comedy and stuff, and I was like, I need to remember to stay focused because I need to be looking at Sarah, but Jesse is just so funny.”

As for the pics of Wells crying at the wedding, he admitted that he cried more than Sarah. He said, “She cried a little bit, but I cried a lot.”

Since Wells and Sarah just got married, they want to “wait a little bit” before they start a family together.

Being a married man has helped him help others find love on “Bachelor in Paradise.” He explained, “Our relationship is highly publicized, especially like the Bachelor world… So, a lot of people do come up to the bar and ask about, like, you know, how did you know that Sarah was the one and all that kind of stuff… And I am able to impart, you know, some of the wisdom that I’ve kind of derived from over the years of falling in love with Sarah.”

Wells dished on the upcoming season, saying, “The first two episodes, I think are amazingly good… The first episode was so funny, like the Lace/Luce thing was just chef’s kiss. Like her faking the birthday thing, like, I remember it happening and thinking it was funny, but I didn’t know how it’s gonna turn out.”

According to Wells, Lace Morris “carried the first episode,” in which she was called the wrong name.

Lace aside, Wells was impressed by Genevieve too, saying, “Genevieve is, like, the new crop of people who are just, like, making phenomenal television… I see that she’s getting, like, a lot of kind of hate online, which makes me feel terrible because she’s so good.”

Wells likes Romeo, saying, “I love him because he is making wrong decisions and it’s making me laugh watching it.”

Adams wants Michael to find love. He explained, “He’s a widower with a kid, so the stakes for him are much higher than everybody else.”

Wells is also rooting for Brandon and Serena since they are “so attractive,” saying, “I want them to have children, just so I see what they look like. The world needs this.”

Wells also shared his take on Salley: “Well, she was supposed to come like seven times. She missed like seven flights.”

He added, “If I’m being honest… that bummed me out because this is a show that everyone wants to go on…. I get calls from people who’ve been on the show being like, ‘I want to go to ‘Paradise,’ what do I gotta do?’ It’s a hard ticket to get, and it was a big kind of a bummer for someone who we like… We wanted her to go, there were people who wanted her to go… We kind of kept this spot for her, and she kept on missing the flights.”

While Salley does eventually make it to “Bachelor in Paradise,” Wells couldn’t reveal whether or not she finds love.