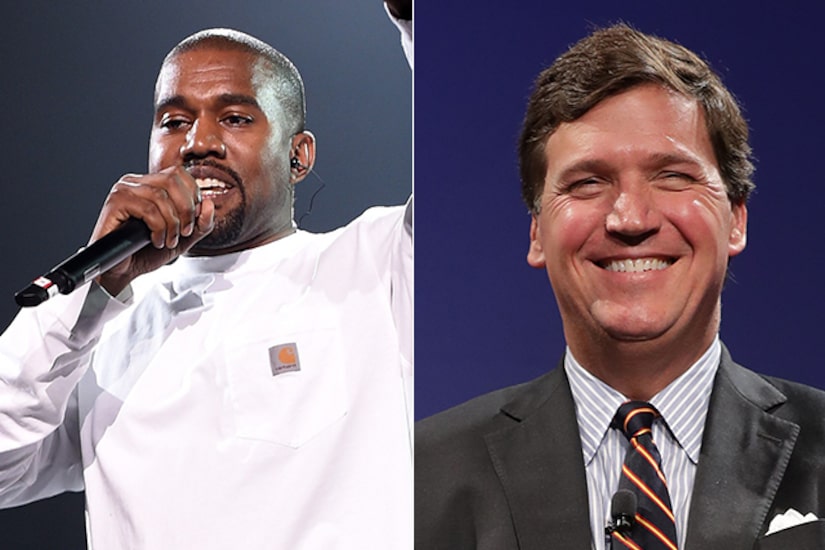 During the episode, Kanye slammed the media and weighed in on the controversy surrounding his “White Lives Matter” shirt.

He told Carlson, “We are in a battle with the media. Like, the majority of the media has a godless agenda, and their jokes are not working. This whole like ‘oh, Ye’s crazy’ and all these things, they don’t work because the media has, you know, they’ve also watched travesties happen, just even specifically to me, and just watch it and act like it wasn’t happening. And they stay quiet about it.”

West called out the media for promoting obesity, predicting the media would criticize singer Lizzo if she lost weight. When asked why the media would promote unhealthy lifestyles, Kanye argued, “It’s the genocide of Black people.”

Earlier this week, Kanye had everyone talking after he wore a “White Lives Matter” shirt at his Yeezy fashion show in Paris.

Kanye told Tucker that his father approved of his fashion choice because he was sharing his opinion. He stressed that white lives “do” matter.

Kanye expressed his belief that some people, like Kris Jenner’s boyfriend Corey Gamble and Vogue contributing editor Gabriella Karefa-Johnson, are “made in the laboratory.”

According to Kanye, these influencers are told how to act and what to say by their handlers, who tell them what to be afraid of.

As for Gabriella and Gigi Hadid bashing him for his “White Lives Matter” shirt, Kanye called it a “set-up.”

Kanye alleges that they got approval from Anna Wintour to criticize him.

Kanye is no stranger to controversy; he has been open about his views about former President Donald Trump.

He admitted, “My so-called friends/handlers around me told me if I said that I liked Trump that my career would be over. That my life would be over. They said stuff like people get killed for wearing a hat like that. They threatened my life. They basically said that I would be killed for wearing the hat. I had someone call me last night and said anybody wearing a ‘White Lives Matter’ shirt is going to be green-lit. That means they are going to beat them up if they wear it. I’m like, you know, okay, green-light me, then.”

Kanye argued that Trump "wanted the best for this country."

West also criticized Josh and Jared Kushner, saying, "After talking to them and really sitting with Jared and sitting with Josh and finding out other pieces of information, I was like, 'Wow, these guys might've really been holding Trump back and being very much a handler.' They love to look at me or look at Trump like we're so crazy and that they're the businessmen."

He insisted they "never brought anything of value other than so-called being a good venture capitalist. I have a major issue with tha,t and it makes me feel like they weren't serving my boy Trump the way we could have."

West also recalled being caught off guard as a creative and investor to learn Josh held a 10 percent ownership in his ex-wife Kim Kardashian's company SKIMS, when the rapper only had 5 percent.

Referring to a recent Instagram post about Josh, Kanye said he wondered how Josh would feel if Kanye owned 10 percent of Josh's wife Karlie Kloss' business and the venture capitalist didn't know. The rapper posed the question, "How would that make you feel?"

While he was in Paris, West also made a “pro-life” statement by wearing a lanyard, including a “photo of a baby’s ultrasound.”