While promoting her new show “Alaska Daily,” Swank told “Good Morning America,” “This is something that I've been wanting for a long time and my next thing is I'm gonna be a mom. And not just of one, but of two. I can't believe it."

The pregnant Swank added, “It's so nice to be able to talk about it and share it."

.@HilarySwank is going to be a mom of TWO!

Hilary also made an appearance on “Live with Kelly and Ryan,” where she opened up about how she’s feeling during her pregnancy. She shared, “I'm feeling great right now, even with the time — you know, I'm on Pacific time, so I'm a little cross-eyed with that. But I'm feeling good right now."

Swank revealed that she was able to hide her pregnancy from the “Alaska Daily” crew until her TV announcement.

Hilary is now in her second trimester, gushing, “It's such a blessing. It's a total miracle. It's unbelievable.”

She also posted a video of her baby bump on Instagram. She wrote, Coming soon…DOUBLE feature! 👼🏼👼🏼."

The news comes three years after Hilary and Philip tied the knot. 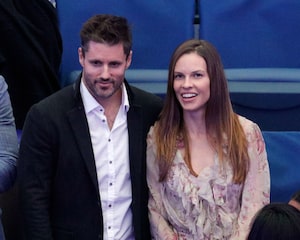 At the time, Hilary told Vogue, “It was timeless. There is just no other way to describe it. I was overwhelmed with such gratitude and thanks to be marrying the man of my dreams and to see all the people we love together in the middle of such a profound setting. It was truly a dream come true."