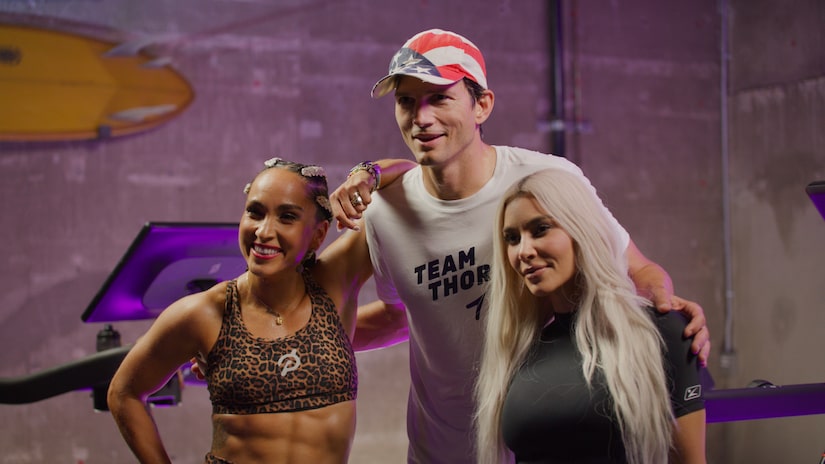 Kutcher is getting ready to run the TCS New York Marathon in the fall and told us he partnered with Peloton to turn his training sessions into a talk show.

He’s bringing in his friends to make those sessions more fun, and it sounds like he may have turned Kim into a runner!

Kardashian appears in the September 6 episode and in a new promo, Ashton tells her, “My excitement level? I’m at like an 11!”

Fast forward to Kim running in skin-tight black workout attire alongside Ashton and at the direction of VP of Fitness Programming and Head Instructor Robin Arzón. Ashton tells Kim, “You are literally running at a 7-minute mile pace. What is happening right now?”

Kim says, “I think this is what I’m missing in my workout,” adding, “This has been inspiring and a little bit life changing on how I’m going to move forward with my routine.”

Kutcher also told “Extra” of interviewing Kardashian, “Kim Kardashian shows up to help people at every turn. She’s a world class philanthropist and a powerhouse businesswoman with a crazy work ethic. That’s what interests me, along with her “why.”

“Our Future Selves” dropped August 30, and new episodes will be available every Tuesday for a total of 10 weeks. Other celebrity guests joining Ashton include Natalie Portman, Kenny Chesney and Chris Paul.

The TCS New York Marathon takes place November 6, and Ashton will run in support of his charity Thorn, “which builds technology to defend children from sexual exploitation and eliminate child sexual abuse material from the Internet.”