Pace revealed the news in an interview with GQ Hype, as he revealed a mutual friend set him up with the Thom Browne executive a few years ago.

"I said to my friend, Nick, 'You know a lot of people, who do you have for me?'" he continued, "And it luckily has worked out. What I'll say about being married, it was once described to me as an endless sleepover with your weirdest friend. In our experience, that is absolutely true."

Pace said of finding a partner, "If you've found one person you can be weird around, hold on tight." 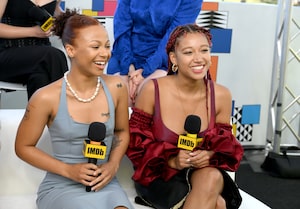 Lee and Matthew are considering children too. "I'd love to have kids," he shared. "I think there's nothing better than little kids running around."

Pace made headlines a few years ago, when he spoke about his sexuality in an interview with W magazine.

At the time, he said, "I've dated men. I've dated women. I don't know why anyone would care. I'm an actor and I play roles. To be honest, I don't know what to say—I find your question intrusive."

Afterward, he tweeted, "In a recent phone interview, I was asked questions that I wasn't expecting and found myself momentarily at a loss for the right words. My privacy is important to me, so I protect it. When interviewed by the media, I keep the focus on my work."

Lee went on, "As a member of the queer community, I understand the importance of living openly, being counted, and happily owning who I am."