“Dancing with the Stars” pro dancer Brandon Armstrong and Brylee Ivers are officially husband and wife!

Over the weekend, the pair tied the knot in a religious ceremony at Siempre in Draper, Utah.

There were 125 guests to witness their special day, including “Dancing with the Stars” pro dancers Lindsay Arnold, Witney Carson, Jenna Johnson, Emma Slater and Britt Stewart.

Armstrong told People magazine, “Because so many people get married in Utah so young, we wanted something that was a little bit different than the traditional church, chapel wedding.”

Before exchanging vows, Brandon and Brylee opted for a First Look. He admitted, “I'm not a crier. But I bawled."

For their big day, Brylee wore a “simple and timeless” dress by Alta Moda Bridal. He gushed, “I knew she was obviously gonna choose a dress that was going to be beautiful. And I didn't have any really defining or super important feelings about what I wanted the dress to look like. I was just happy that it was something that was beautiful and that she felt confident in. Everything was so, so good!"

Brandon and Brylee will honeymoon in the Dominic Republic.

Armstrong is “excited” about their future together. He said, “I'm excited that I can commit to her and express my love to her and that I can do it in a way that I think is right. A way that is good and loving and old school. I'm excited to show people she's the love of my life and that I'm committed to her."

In March, Brandon announced their engagement after a year of dating.

Along with posting some proposal photos, he wrote on Instagram, “I made a good decision a while back to ask you on a date…made the BEST decision of my life asking you to be my wife last night! I love you forever bry!❤️”

Armstrong revealed to People that he was “planning [the proposal]  for a couple of months.” 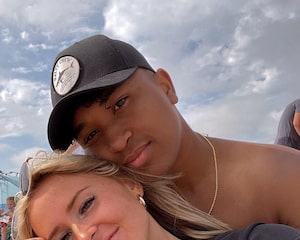 He popped the question with a 3.5-carat circle diamond ring in March.

Brandon added, “Brylee is big on memories. So I was thinking, what if I made a movie trailer that she could keep forever? One of the first times we had a deep conversation was outside a movie theater. I wasn't nervous about anything except her thinking it was incredible. I wanted it to be perfect, as representative of what we've done so far, everything we stand for. I wanted it to be big and bright. But I'm not a good talker and crier. I started crying when the trailer came out and I knew I was screwed. All of our best friends and family were there and I walked her down to the front, told her I loved her and can't wait to start a family with her. I'm just so excited for our future together!"

They met on Instagram. Brandon admitted, “I was going on a few dates and they were all lame. They were terrible. I downloaded an app that's similar to Tinder but for our Church to be funny. I was scrolling through and saw her but I was too embarrassed to message her. So, I DMed her on Instagram instead and she ghosted me."

Brylee quipped, “I was trying to be cool.”

After a month of messaging, they went on their first date at Cheesecake Factory. He confessed, “I was nervous. But I just remember was how easy the conversation was."