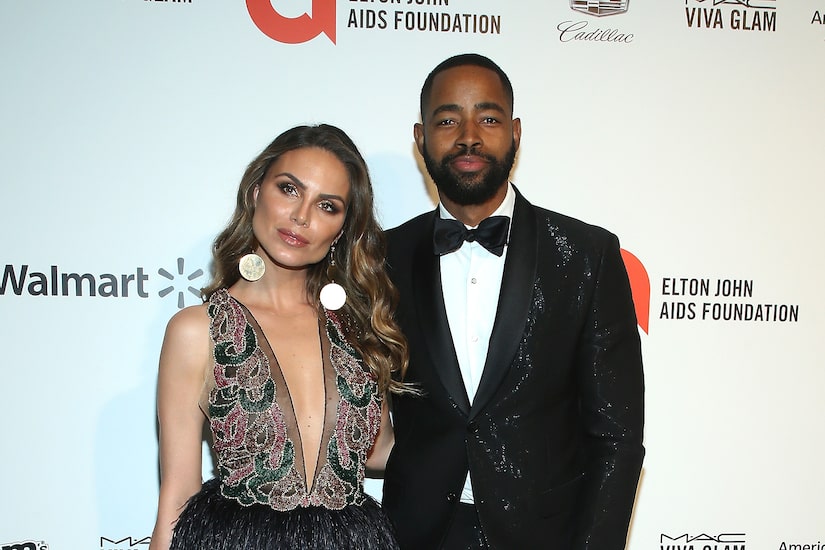 Earlier this month, the pair tied the knot in Tuscany, Italy.

They exchanged vows at Villa Mangiacane, in front of their close friends and family, including his “Maverick” co-stars Glen Powell, Greg Tarzan Davis, his “Insecure” co-stars Issa Rae, and Yvonne Orji.

Other famous faces to attend include Anna Kendrick, Ego Nwodim and Nik Dodani.

Nina told Vogue, “We always knew we wanted to get married in Italy because going there was the first trip we ever took together.”

Of her dress, Nina dished, “I wanted a simple off-white silk material without lace and sparkles, but at the same time something classic, timeless, and elegant. Stylist Apuje Kalu helped me coordinate with Dolce exactly what I wanted and the team was amazing! They understood right away what I had in mind, and when I saw the sketches for the first time, it looked exactly as I’d imagined it. Apuje and I met with the Dolce team in Los Angeles for measurements and to look at color swatches and fabric samples. Then, we did two fittings in Milan with Lucio Di Rosa and the design team and one in Florence and the dress was ready. The big tulle that was under the dress was actually taken from their Alta Moda collection.”

Nina also wore her grandma’s ring for her “something old,” adding, “It was like having her with me.”

Jay admitted he felt some “panic” just before Nina walked down the aisle. He shared, “There was a moment when I was standing there in front of everyone waiting for the giant wrought iron gates to open and to see Nina but the moment kept going and going.”

“So I yelled out, ‘Baby, you coming?’ There was another beat or two after where Nina didn’t answer, so I turned to the crowd and said ‘I guess that’s a no, there’s a space up here if anybody wants to get married today,’” Jay quipped. “And in perfect timing as everyone laughed Nina yelled out, ‘I’m coming baby!’ Everyone laughed at us and then the gate opened and I was in awe when I saw Nina in her dress for the first time.”

Nina was “very emotional,” but “tried really hard not to cry” when she walked down the aisle with her father.

She admitted, “Honestly, I didn’t see anybody else but Jay — I was so focused on his eyes and just being present.”

The pair planned their wedding to perfection, mostly through Zoom. Of the end result, he gushed, “It was amazing. After everything that everyone has been through over the last few years to bring over 190 people together for three days in Tuscany and celebrate was surreal.”

Ellis added, “Seeing all of our friends from different parts of our lives together smiling and laughing, connecting, forming their own friendships was such a huge part of what we wanted out of the weekend and the celebration. We wanted to create moments and memories that would last the rest of our lives.”

Senicar shared her take, saying, “I am still processing everything, but I am beyond happy that all of our friends got together to celebrate our love. We just really wanted everybody to have a good time and get to know each other. And most importantly, dance. We come from two completely different sides of the world, different cultures, and backgrounds, and it was magical to see how all of that got mixed together in such a beautiful and spontaneous way with the people we love the most.”

They were originally set to marry in 2020, but was forced to push their date back, due to the COVID-19 pandemic.

Jay noted, “At the time, Italy was one of the hardest hit areas in the world, on a strict lockdown and closed to tourists. Like everyone else in the world, we weren’t sure how widespread it would be or how long any of it would last, so we had to cancel everything.”

In March, the pair had “72 hours” to travel to Italy to “taste food, see flowers, linens, cutlery, plates, and glassware in person.”

The pair met in 2015 at a Los Angeles bar, where they were introduced by creative director Tony Mancilla, who ended up officiating their wedding.

After four years of dating, Jay popped the question at Dreamland Beach in Bali.

Months after his proposal, Nina gave birth to their first child, a daughter who they named Nora Grace.