Along with posting a series of Instagram photos of their bundle of joy, David wrote on Sunday, “IT’S A GIRL!!!! Gemma Clare Henrie was born 7lbs 15oz at 3:21am. Maria is currently enjoying the most deserved nap ever haha. She stuck to her plan l and had a drug free birth and I couldn’t be more in awe of her!”

“Thanks be to God for the greatest gift on earth and Maria and I thank you all for your prayers,” Henrie added. “I received many messages and I really appreciate it. #vitabella #deogratias and a huge shout out to our nurses Morgan and Sofia and our midwife Katy! Y’all are spectacular and thank you to all the nurses out there we appreciate you.”

He wrote, “Maria and I were really racking our brains on what to get our son James for his first birthday,” adding the hashtags “#3” and “#bigbrother.” 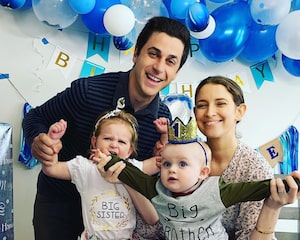 Henrie explained in the comments that they would be waiting until the baby arrived for the gender reveal. “Couldn’t think of a better gender reveal then that am I right?!”

Back in 2019, David opened up on Instagram about their struggles to start a family, sharing that Maria had suffered three miscarriages before they had Pia. He shared on Instagram Stories on Wednesday that she had another miscarriage before James was born, and another in 2021.

He wrote, “Christmas Day 2019 my wife suffered her fourth miscarriage and thought from then on that Christmas would be a day of mourning… however, God had other plans… Christmas Day 2020 she gave birth naturally to my son James.”

David went on, “Now this past year she suffered yet another miscarriage, our 5th. I’m proud of her because she did what needed to be done to heal and now we’ve been given another chance with our 3rd child and we are hopefully clear of miscarriage danger.”

He added, “A lot of people don’t talk about miscarriage, but it’s real and it’s traumatizing in ways you may not even be aware. Pls reach out for help. And always know your little angels are smiling down upon you.”