Singer Christina Perri performed at the Gracie Awards just one day after announcing she is expecting a baby.

“Extra” caught up with Christina on the red carpet, who told us, “I literally announced yesterday… I am excited.”

The news comes more than a year after Perri revealed her pregnancy loss.

She shared her message of hope to others, who have suffered loss, saying, “Number one is hope. Pregnancy after loss is already so hard, it doesn’t matter how many losses you have had… I think it’s the same difficulty to try to get pregnant again and it’s the same bravery and courage. I want to continue being the voice for people who are trying again and who maybe are afraid to try and again and show them my husband, my four year old, me, we are all choosing joy, choosing hope… to dream big and hope it works out even though life could have made us really hard… We’re just trying to stay soft and hopeful.”

Before performing, she admitted, “I feel like I am nervous,” adding, “I also feel really good about being here, especially the type of event that it is. I have an all-girl band… This is so right up my alley here, the feminine vibe.” 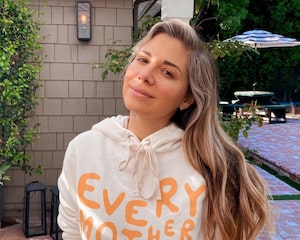 Perri said her mom is a powerful woman in her life, explaining, “Now that I am a mom, I realize how powerful that relationship is... I really cherish my mom and my grandmother.”

The Alliance for Women in Media Foundation (AWMF) puts on the Gracie Awards every year to celebrate women in television, radio, and the digital space, and the organization says it aims to honor those who have “demonstrated their commitment to sharing emotionally charged, timely, and compelling content that continues to further the achievements of all women in media.”