“Extra” spoke to Zoe Saldana as she received the CinemaCon Star of the Year Award at the CinemaCon Big Screen Achievement Awards.

She told us, “I’m having quite an out-of-body experience. It’s not something I’m accustomed to, but it feels quite special, actually.”

While the trailer for “Avatar 2” debuted at CinemaCon, Zoe revealed that she hadn’t yet seen it!

“I haven’t seen it yet, but I emailed with Jim overnight, and he was like, ‘Zoe just go watch ‘Doctor Strange’ and just make sure you get there on time for the trailers because you have to witness it on a large screen, IMAX, Ultrasound, all of these things.’”

The original movie debuted in 2009, and "Avatar: The Way of Water,” the first of four sequels, is set to premiere in December.

The trailer was shown to CinemaCon goers in 3D, and USA Today reports viewers saw the “Na'vi people swimming in crystal-blue pools, soaring over sparkling waterways on winged creatures, and emerging from the ocean to wage battle.” It reportedly ended with an emotional moment between Jake Sully (Sam Worthington) and Neytiri (Saldana), as he told her, "I know one thing. Wherever we go, this family is our fortress."

Saldana also reflected on how exciting it is for audiences to be back in theaters for movies like “Avatar.”

Saldana told “Extra,” “We yearn for human connection and we need to know that we are there by standing shoulder to shoulder and having something in common that we enjoy that moves us and I think that the whole theater experience or organizations and events like this are super important because we all come together to an event like this to celebrate something together that we all like a lot. There is this infections energy that we are all bringing collectively, happiness, excitement, positive vibes, hope and that’s good. It is good to have.”

We also asked about her reaction to James Corden leaving “The Late Late Show.”

She joked, “I hope that he’s ending the show because he’s going to run for president… or Prime Minister of Great Britain?” 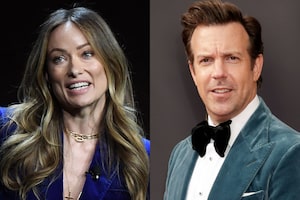 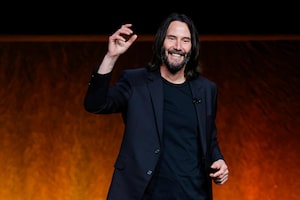 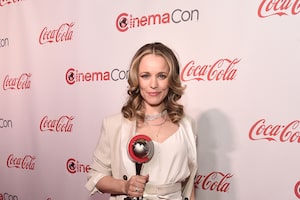