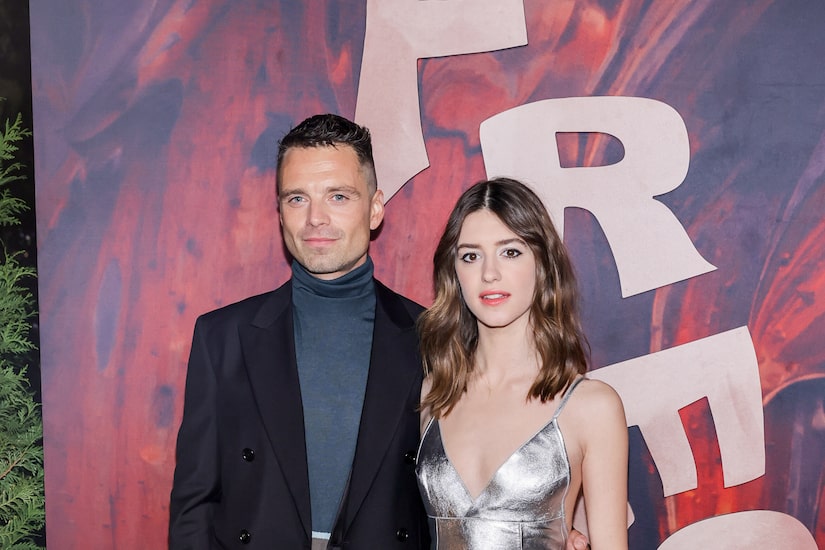 Sebastian Stan and Daisy Edgar Jones are starring in the darkly comedic new horror flick “Fresh,” about a girl who falls for a guy… only to find out the hard way that he’s a cannibal.

“Extra’s” Rachel Lindsay spoke with Sebastian and Daisy about what drew them to the film, which upends its audience and mocks traditional rom-com tropes.

When Rachel noted that it wasn’t a good look for Sebastian, he quipped, “I’ll take it. I take that as a compliment.”

Rachel pointed out that she often questioned if she was “twisted” for shipping the characters, to which Sebastian said, “Honestly, that is something that we were kind of hoping for in a way from an audience, just in terms of getting engaged into the movie. It is twisted. That connection at the beginning has to be genuine in some way in order for you to really get invested.”

“It’s actually kind of that connection throughout the movie that also leads to Noah learning how to use that to her own advantage,” Stan added. “But it’s that fine line because it could go either way at some point, and I think that’s one of the things how she played it so brilliantly. You start to know what’s going on and you’re with her and then after a point you kind of lose her a little bit.”

Daisy called the script “unique,” emphasizing, “I really was keen to do something I hadn’t done before and ‘Fresh’ was certainly very different to any of my other work, and again, I was so excited to work with Sebastian… I just thought it was an opportunity to take the rom-com tropes and slightly subvert them and turn them on their heads.”

As for what drew him to the role, Stan said, “’Different’ is definitely something that sticks out to me… something that doesn't quite sit right with me, especially at the beginning, I end up thinking about it more and then I get curious and want to know more.”

He also “wanted to work with [Daisy],” commenting, “I was a big fan of hers, and [director] Mimi [Cave], when we met, had such a specific kinda take on this whole film.”

Director Cave knew she had her guy after watching Sebastian’s knife-dancing audition tape!

He elaborated, “The way she wanted to shoot it and her background in music, there was a lot of music and dance in the movie, so that mixed with the horror and the comedy and the blend of that it was… exciting and different.”

Sebastian and Daisy had to balance the gore with the humor. Daisy stressed, “I think we felt it was really important to ground every sort of truth, all those moments of abject terror or those moments of connection, and the relationship aspect. We really wanted to ground those parts in truth in order to earn the surrealism that ensues and also the moments of levity we get with that comedy. I think it’s really fun. ‘Fresh’ never makes you sit in anything too dark for too long. It always takes you out, or it makes you laugh in a moment you didn’t expect to, and then you kind of feel bad that you’ve laughed. I enjoy films like that, I think they’re all the more unsettling because you’re going through so many emotions scene to scene and so, yeah, it was a fun sort of line to tread.”

Sebastian also shared his reaction to the raves for his series “Pam & Tommy.” Along with being “grateful,” he said, “I know a lot of work went into that, I know Lily [James] worked really, really hard. We all did. And I know everyone had the best intentions for it and it’s tricky because, again, there's pieces to that story I feel weren't very known that needed to be told in a way, and you wanna kinda do it justice. It was a great group of people and ultimately I felt it’s nice to see it’s connected with people.”

“Fresh” is streaming on Hulu now.