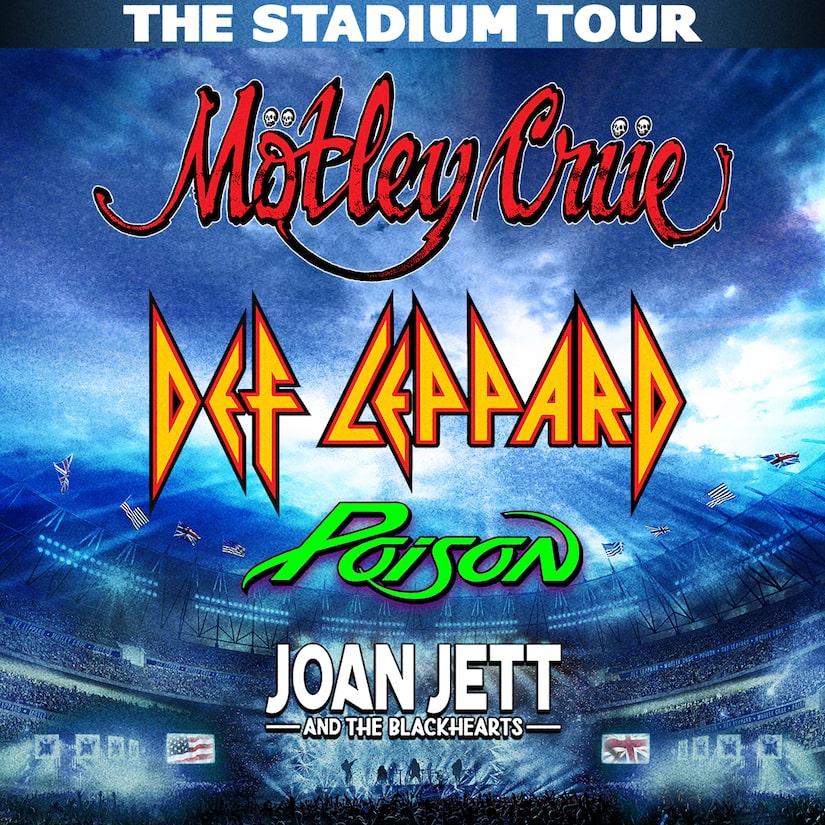 Mötley Crüe, Def Leppard, Poison, and Joan Jett & the Blackhearts are months away from finally hitting the road for their Stadium Tour!

The tour was delayed for two summers due to the COVID-19 pandemic.

The summer tour, which is produced by Live Nation, will be kicking off in June.

In a statement, Mötley Crüe said, “It’s on! We don’t think we’ve ever looked forward more to kicking off a tour than this one. We can’t wait to finally see all the fans across North America again. Get ready for a wild ride this summer!”

Mötley Crüe have been together for 40 years. Thanks to their hit albums like “Too Fast for Love” and “Girls, Girls, Girls,” the band has sold over 100 million records worldwide.

In December 2019, “Extra” caught up with Mötley Crüe as they were promoting the tour. Nikki Sixx joked that they were going to “sleep for six months” to prep for the tour.

Tommy Lee expressed his excitement for tour, saying, “We’ve played stadiums, you know, in the past… but never an official, like, stadium tour, so we’re all looking forward to this.”

Def Leppard, who were inducted in the Rock & Roll Hall of Fame in 2019, recently celebrated their 45th anniversary as a band. Along with selling 110 million records, they have amassed a staggering 5.5 billion streams since 2018.

In a statement, Def Leppard front man Joe Elliott said, “On behalf of the band, we’re beyond thrilled that the stadium tour is finally happening this summer… It’s been a while coming and we can’t wait to get back on stage again & we can’t wait to see you in one of the many stadiums soon!”

As for their secret to keeping the band together, Joe told “Extra’s” Senior Music Correspondent Adam Weissler in December 2019, “We share a dressing room. We don’t have the diva thing… We like each other, we warm up, we joke, we try clothes on, and we laugh at each other… It keeps it real.”

Poison, who rose to fame in the 1980s, has sold over 50 million albums worldwide, thanks to their hit songs “Every Rose Has Its Thorn,” “Talk Dirty to Me,” “I Won’t Forget You,” “Something to Believe In,” and “Life Goes On.”

Poison’s Bret Michaels said, “There are not enough words to thank the three generations of fans for making this such an exciting, record-breaking, historical tour with the fastest sellouts in history at these stadiums.”

“Extra” caught up with Bret, who opened up on his health before the tour was scheduled to start in the summer of 2020. At the time, he said, “As a type 1 diabetic, I think five injections a day since I’ve been 6 years old… that battle, plus the brain hemorrhage and heart surgery, I said, ‘No matter what, thank you to so many people out there that have kept me on this good side of the dirt and rocking it out there and having a great time.”

Joan Jett & the Blackhearts said in a statement, “We are so excited to be back out on the road! We missed doing what we love most and can’t wait to see the fans out there again!”