Eve’s bundle of joy has arrived!

Along with sharing a pic of their precious son sleeping, she wrote on Instagram, “Our Beautiful boy was born Feb 1st 2022 💙… Words can’t describe this feeling.”

Eve announced her pregnancy in October. At the time, she posted a pic of her growing baby bump. She wrote, “Can you believe it @mrgumball3000 we finally get to tell everyone!!!!! ❤️ You all know how long we’v been waiting for this blessing!!!"

She revealed that the due date was February, so it looks like Wilde came right on time! 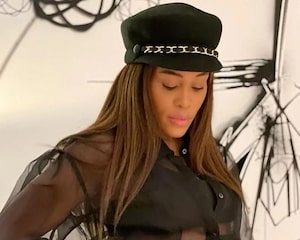 Cooper expressed that he was “very excited” to have a “lil human on the way.”

The two have been wed since June 2014. Eve is already the stepmother of Cooper's four teenagers from his last marriage, but Wilde is their first child together.

Last year, she opened up to People magazine about being a stepmom, saying, “It's been now 10 and a half years I've been in their lives and they've been in my life. They've grounded me. In the beginning, when I first met my husband, then-boyfriend, I was like, 'This is never gonna last because you got four kids! How's this gonna work?' But then I met the kids and honestly was like 'Wow, kids are amazing.'"

“I will say it took years, though, I'm not gonna lie," Eve admitted. "It did take two or three years to adjust, just our relationship with the kids. But I have to say I'm very lucky. I feel very, very lucky that I had my insta-kids — I call them my bonus children!"

Eve announced she was leaving "The Talk" in November 2020, saying at the time, "I've been so grateful I've been able to stay here in London and do the show, but I can't see for me, in the foreseeable future, of traveling back at the moment. This is one of the hardest decisions in the world.”

“At some point," she said, "you have to choose what makes you happy, what's right for your family.” It would appear she not only put family first, she also made the decision to build her family!