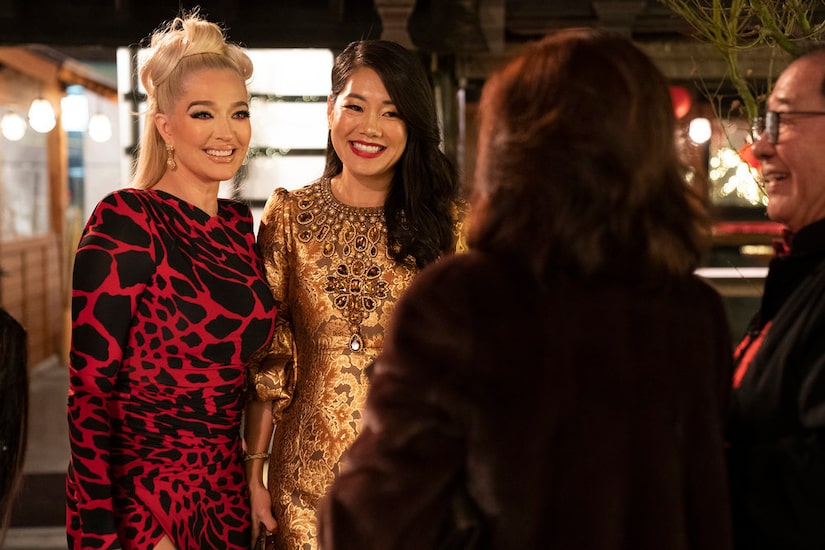 “The Real Housewives of Beverly Hills” star Crystal Kung Minkoff is sharing her take on castmate Erika Jayne during an interview with “Behind the Velvet Rope with David Yontef.”

Erika is in the midst of some legal drama as estranged husband Tom Girardi — who is said to be suffering from Alzheimer’s disease — faces embezzlement allegations, of which she denies any knowledge.

When asked if she is afraid of being called into court over Erika, Crystal said, “I'm not worried about it…  Every time I talked to Erika and the group, it's on camera, there's evidence of it. So anything I say is going to, it's already there.”

Unaired footage of Erika was subpoenaed by lawyers in one of the lawsuits against her and Girardi. Lawyer Jay Edelson recently told Fox News, “We believe that Bravo has hundreds of hours of unaired footage, as well as documentary evidence, which directly relates to this case. So far, Bravo has chosen to use the Girardi embezzlement scandal to increase ratings and make significant money for itself."

Erika’s lawyer Evan Borges responded to the subpoena, saying, “The subpoena sounds like a fishing expedition or desperation move if it is directed at Erika. I keep explaining that there is no hidden treasure, which we have supported by providing counsel for the bankruptcy trustee with all relevant bank account and financial information in Erika’s possession. There’s only a small amount of additional information that I need to provide to the trustee, which, along with everything else we’ve provided, shows that Erika’s divorce filing was for legitimate reasons, and she has been trying to make it on her own."

Minkoff said she has empathy for what Jayne is going through since she has personal experience with Alzheimer’s. She noted, “I couldn't let go of the fact that the main story for her was that he was possibly suffering from Alzheimer’s, which I had to deal with for nine years in the most horrific way… I was just, I just, my heart was so open and vulnerable to that and empathetic because I know what that was like.” Crystal praised Erika for being able to film despite everything that is going on in her life. She shared, “I could not believe every day I showed up she was there. I was very surprised… I think that's why all of us were like… ‘We're very impressed that you're here.’ She's like, ‘I'm here,’ and I'm like, ‘Wow, I don't think I could do that.’”

It is unknown if Erika will be back for the next season, but Crystal believes “she deserves a spot” if she wants it!

Minkoff also kept it real about her “serious conversations” related to quitting the show. She admitted, “Very, very early on… It was very tough because I, it just wasn't, it was not the start and the tone that I, I wanted, ever wanted, ever expected and it was very challenging for me. And I really struggled.”

“I'm also a very committed person,” Crystal went on, “and that was what we discussed and was like, you know, that's, that's who I am. That's who we are as a family, we finish things. So that's what I did.”