Charlize Theron is back as Morticia in “The Addams Family 2.”

“Extra’s” Cheslie Kryst caught up with Theron, who opened up about the movie and weighing in on the buzz surrounding the next Bond.

Theron said she has seen “The Addams Family” sequel and her kids are going to see it when it comes out today.

Charlize said, “Very excited, yes… One of the parents at our school organized a movie night, and then realized, she called me later, she's like, ‘I'm so sorry, I didn't even like run this by you, were you uncomfortable with this?’ and I’m like, ‘No, it’s totally fine and so nice that you're doing it.’ So this other parent organized this movie day for some of our kids.”

The star enjoyed voicing Morticia, the matriarch of the Addams family, again, saying, “It was nice doing a second one… I think just finding consistency in her voice… She is somewhat dry.”

She enjoys figuring out “how to make her emotional with sounding as she does.”

Cheslie asked, “Were there times that you missed having to do like combat training and fight choreography and other stuff, or were you happy to have this little escape from it?”

Charlize confessed, “I was very happy to have this escape… My body was super grateful.”

For years, people have talked about whether Charlize would ever step into the role of Bond after Daniel Craig says goodbye with “No Time to Die.” Cheslie asked, “If there was a female Bond, who would you like to see in front of camera?”

Theron explained, “You know I've been, interestingly, reading some of the stuff that came out with Daniel and Barbara Broccoli… I tend to agree with them I think the conversation comes from a good place which is that we want more opportunity for women out there, but I think we have to be careful that we don't try and squeeze… those opportunities out of existing things that I don't know how interesting that could be.”

She went on, “We have to create more space for original material to kind of exist… so I understand where they're coming from… I think that we need more badass action movies for women… What I take from this conversation is there's a real hunger and a real need and interest to see women play more of these roles and so we should listen to that and get people to make more of them.”

Like her “Atomic Blonde” character which she will reprise, “We’re working away on the script right now.”

And with Halloween around the corner will she and her family be dressing up as the Addams Family?

She said, “We did Addams Family Halloween when the first movie came out and I dressed up as Gomez, I think I made a really dashing Gomez.”

Teasingly, she said of Oscar Isaac, who voices Gomez, “Oscar, I think, felt a little intimidated by my Gomez.”

Charlize went on, “My girls were Wednesdays, and my mom was Morticia. I was intimidated by her Morticia… You know I love Halloween because my kids love Halloween so much, so I have not figured out what I'm doing for Halloween this year but they're working on several costumes.” 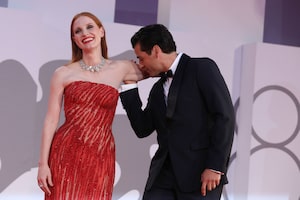 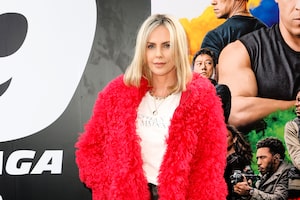