Jessica Batten, who shot to fame on Netflix’s “Love Is Blind,” is engaged.

Batten, 34, tells People her boyfriend of more than a year, Benjamin McGrath, 35, popped the question.

"I don't think it has quite sunk in,” she gushed to the outlet, “but I'm definitely floating somewhere on cloud nine. It's been really, really exciting!"

The foot and ankle surgeon proposed at Akash Winery in Temecula, California, and their family and friends were there for the special moment.

"It was quite sneaky," Jessica explained. "We'd been planning on my dad being in town that weekend for the Bears-Rams football game, but then my dad made a change to his itinerary at the last minute. I thought that was a little strange, but then he said he would plan dinner for all of us on Friday night. I didn't think too much about it. Then Friday came and Ben said, 'Hey, I ran late in surgery and hit traffic, can you just meet me at this winery? We're having dinner there.'" 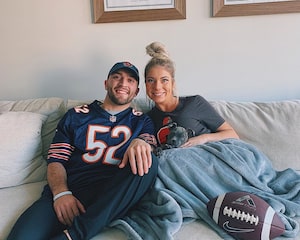 She continued, "So I got in the car with my dad and my step-mom to head to the winery, and I could tell my dad was prolonging things. I think Ben was still setting up. But anyway, we make it out to the winery, and it was just a gorgeous night. I walk out and this woman meets me and takes my purse, which I thought was a little strange. She said, 'Let me escort you down into the vineyard.' I'm like, 'Oh, we're getting a wine tour!'"

Instead of a wine tour, Jessica walked into a scene out of a fairy tale.

"I walked down into the vineyard, and one of the aisles of grapes had rose petals all the way down to this gorgeous arch with roses all around it," she said. "Ben was standing there, and I pretty much knew at that point what was happening. So I just started getting overwhelmed with emotion. When I walked down, the first thing he said was, 'I want you to remember this moment for the rest of your life.'"

McGrath proposed at sunset to the JP Saxe song “Line by Line” and presented her with a round brilliant ring from Mark Broumand.

"I was totally overwhelmed," she Batten said. "The best part was — and I had planned this for whatever he asked me — I recited this line from ‘Suits’ because we had watched eight or nine seasons together when we were long distance: 'Do I have brains in my head? Do I have a heart in my chest?' So that's what I said instead of 'yes.' We were both crying!"

The couple shared a kiss and Jessica said, "As we start walking back to the winery I see all of my best friends who had flown in from all over the place," she says. "Ben's brother had even flown in from Jordan, and his entire family was there. There were all of these people there to celebrate us. It was super cool."

Jessica and Ben started dating right at the beginning of the pandemic, just after she became known for “Love Is Blind.”

"It was crazy timing," Batten said. "We were the epitome of a COVID couple. Between COVID and long distance, we had to find ways to make our relationship work, but it also was great timing because he was supposed to go visit his brother in Jordan and that got postponed. He wasn't able to go on that trip so we were able to spend that time together. I would have been on the road traveling for work too. So I think COVID actually brought us together."

Looking back at her time on reality TV, she said, "It was such a weird time, and I was definitely experiencing some hate when the original show came out. It was like, kind of like that Taylor Swift song 'Reputation.'"

That “hate,” refers to her relationship with Mark Cuevas on the show, and when she famously called off their engagement by saying “I don’t.”

Mark has since moved on with Aubrey Rainey after the show. They are now engaged and have a son together.