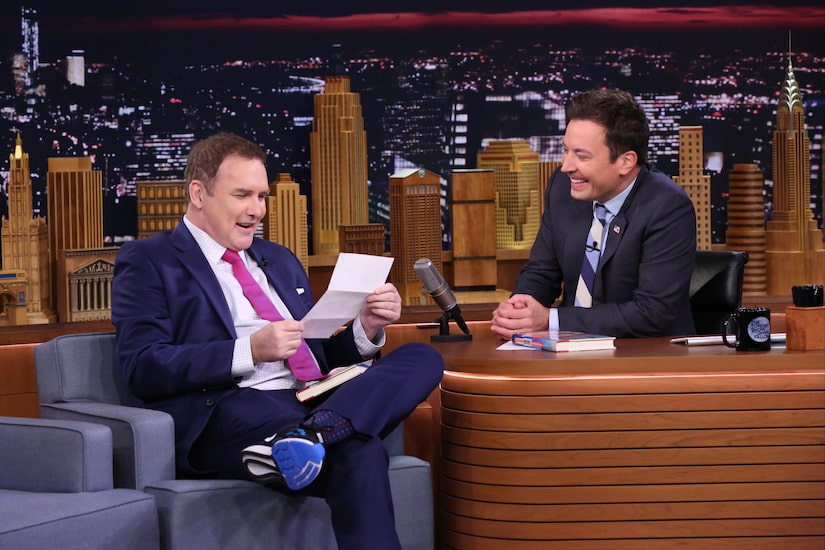 Last night, the late-night hosts paid tribute to comedian Norm Macdonald, who passed away after a private nine-year battle with cancer.

Jimmy Fallon honored Norm on “The Tonight Show,” calling him a “comic’s comic,” and retelling one of his funny jokes about dogs. “I memorized his whole act,” Fallon said.

Fallon also shared a story about running into Macdonald at a restaurant in NYC. Jimmy wasn’t famous at the time and was starstruck to see one of his favorite comedians at breakfast. He walked up and told Norm he was “the best.” Little did he know, Macdonald was eating with legend Bob Newhart. Norm told Jimmy, “The best? This is Bob Newhart.”

Seth, an “SNL” alum himself, recalled the first time Norm stopped by the set. “I started at ‘SNL’ in 2001, and I remember one time, Norm walked back into the studio to visit. I don’t remember how old his son was at the time, but his son was young and someone said, ‘Hey, Norm, how’s being a dad?’ And he said, ‘It’s going great. Still no abductions.’ That’s the first thing I ever heard him say in person.”

On “The Late Show with Stephen Colbert,” the host revealed he worked with Norm on “SNL” for a few weeks, and helped on “Weekend Update.”

According to NPR, Stephen told the audience, “I wish I were a good enough comedian to come up with a joke right now about Norm Macdonald having died. But the only comedian I know who could get away with a ‘Norm Macdonald is dead joke’ is Norm Macdonald. And I'm going to miss the fact that there's nobody left on the planet who can do that, and the comedy world is poorer for it today.”

He recalled, “All Norm ever wanted to do was to make us laugh, and he was absolutely brilliant at it. There was nobody quite like him. I felt privileged any time I got to be in his orbit. He leaves us as one of the all-time great comics, perhaps the single greatest guest in the history of late-night television, I think.”

"In every important way, in the world of stand-up, Norm was the best,” he said. “An opinion shared by me and all peers.  Always up to something, never certain, until his matter-of-fact delivery leveled you. I was always delighted by his bizarre mind and earnest gaze.  (I’m trying to avoid using the phrase, ‘twinkle in his eyes’).  He was a lifetime Cy Young winner in comedy. Gone, but impossible to forget."