Heidi Klum was back at the judges’ table on “America’s Got Talent” Tuesday night after being in Venice, where she attended the Dolce & Gabbana show and watched her 17-year-old daughter Leni make her runway debut.

“Extra’s” Terri Seymour caught up with Klum, who gushed about her daughter’s modeling. “I'm so proud of her,” she said. “She's not even nervous. It's crazy. I said to her before, ‘Don't you want to walk a little bit before?’ She was like… ‘No, I'm just gonna wing it…’ We are very different that way. Me, I get nervous about everything… She has a lot of self-confidence. She's quiet inside in a way where she's like, ‘I'm going to do my best,, obviously but that’s what it’s going to be,’ and I was like, ‘Wow.’”

The mother-daughter duo dazzled in matching D&G and had a great time at the star-studded evet. “We flew together with Doja Cat… We ran into all these amazing people,” Heidi dished.

The supermodel is in super mom mode, saying, “She did a photo shoot there — I was basically just tagging along making sure she is everywhere at the right time.”

Klum also gave her take on the “AGT” semifinals, saying, “I loved Jimmy. He ended the show so well.” 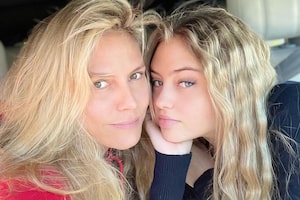