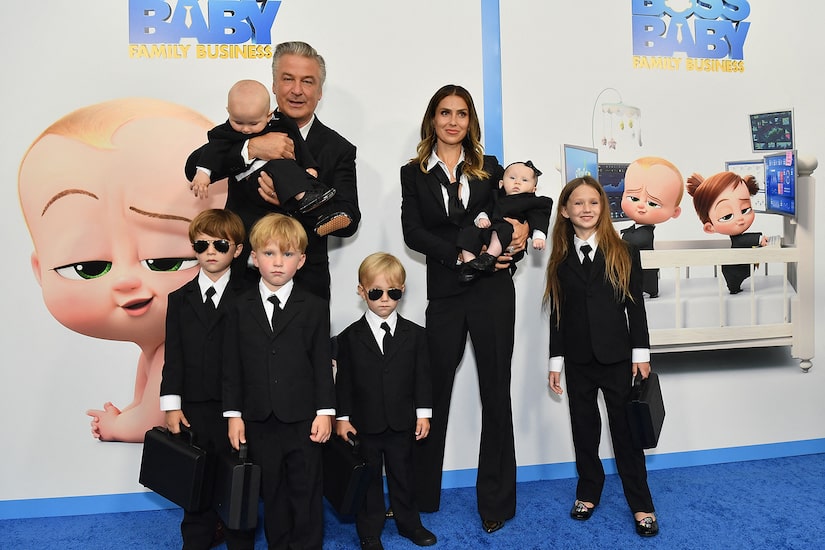 It was a family affair for Alec Baldwin, his wife Hilaria, and their Baldwinitos at the New York City premiere of Alec’s movie “Boss Baby: Family Business.”

“Extra’s” Cheslie Kryst caught up with Alec and Hilaria, whose six children were dressed in black suits and briefcases like Boss Baby himself!

Alec explained, “Someone says to me… 'We're going to dress all your kids up as Boss Baby to go to the premiere.' And I'm like... ‘Ha ha. That's funny.’”

Cheslie asked, “Did you tell them what to pack?” Hilaria said, “No, I don't tell them to do anything. They do everything. They tell us what to do. They are the true boss babies.”

The couple is busy at home and with their new “What’s One More?” podcast. During a recent episode, Alec revealed he has OCD.

Sharing what it is like working together, Alec said, “Well, we spend a lot of time together. Might as well make some money… We talk all the time. Let's record it.”

Hilaria added, “We've had our stressful moments. But I feel like we always make it through.”

Discussing physical and mental health, Alec said, “She's much more fluid than I am.” Hilaria continued, “We complement each other. You teach me things. I teach you things. We support each other.” Alec explained, “I'm with a person who's super healthy in terms of diet, fitness, well-being. And so when you're with somebody like that it either rubs off on you or it's going to be a problem.”

Some conversations are harder than others. Alec said, “I'm somebody who doesn't want to change. I'm a bit older than her. I don't know if you read that in the papers... Change is hard, but to admit that there are things in my past that have made me what I am today, good and bad, that's something I'm learning that's worth examining."

Hilaria said, “We talked a lot about mental health much more recently... Through leading by example, through coming and saying I struggle with something. Whether it's mental health... I did it with my miscarriages... it makes you feel like you're not alone.”