The show went on hiatus after a heated exchange between Sharon and Sheryl Underwood about racism. Osbourne later left the show.

In today’s episode, Sheryl addressed the conversation, text messages she received from Sharon, and the future of their relationship.

Underwood explained, “I thought I was having a conversation with a friend, but also I knew I had to be an example,” saying she “didn’t want to be perceived as the angry Black woman.”

“I wanted to remain calm and remain focused, and it’s difficult to go back to that day because I just feel the trauma,” adding that she felt “trapped.”

Co-host Elaine Welteroth was with them that day and said, “When you go back and watch what happened in that episode, you will see two Black women walking the same tightrope that Black women are walking every single day in the workplace.”

She went on, “We knew that we had to stay composed in that situation, even in the face of someone who was A, not listening, and B, who went off the rails into disrespect.”

After the exchange, Sheryl spoke out on a podcast and said she hadn’t heard from Sharon. Osbourne responded by sending the Daily Mail text messages she claimed she had sent to Underwood to apologize.

Sheryl addressed the texts on Monday’s episode, saying, “I want to clear something up. There was a discussion about Sharon and I communicating with each other. I have not spoken to [her], and do not have any phone call, missed or received, that I can find in my phone [from her].”

Underwood added, “But there were text messages sent to me,” confirming that she did not “speak about or acknowledge those text messages” because she was unsure if she was allowed to communicate with Sharon in the midst of a network investigation.

Osbourne had told DailyMail.com, “I not only sent these messages to Sheryl but I apologized to her in person in her dressing room.”

In one text from March 12, Sharon wrote to Sheryl, “Sheryl, My heart is heavy and I’m deeply saddened by the events that transpired on Wednesday. I don’t want to lose my true friend over this. Im sorry for telling you to f**k off during break, I’m sorry for accusing you of fake crying while we were live on air and I’m sorry for losing my temper with you. I felt shocked, scared and saddened by what felt like was a blind sided attack. You know me. You know how I’ve always had your back. We’ve outlasted everyone on this show and that’s because we’ve always been a team and had each other’s backs. I consider you a genuine friend. If you want to talk on the phone over the weekend I’m here. Once again from the bottom of my heart I’m sorry. Is there anything You need from me or that I can do to help you heal? Love and respect always - Sharon.”

The text went unanswered. Three days later, Sharon texted, “Hi Sheryl. I know you’re taking space and I don’t want to disrespect that. I’m just reaching out because I want you [to] know I’m thinking about you. If you are willing, can we talk before Wednesday? Big kiss.”

In her third text on March 18, Sharon wrote to Sheryl, “Sheryl I am thinking about you. Hope you are well. Sending my love.”

Meanwhile, Sheryl says people have asked what she would do if she saw Sharon today.

She explained on "The Talk," “If she greeted me warmly and sincerely, I would give her back the same, because we’ve been on this show for 10 years. I want people to understand when you’re friends with somebody, you stay friends. And what did Maya Angelou say? When people show you who they are, believe them.” 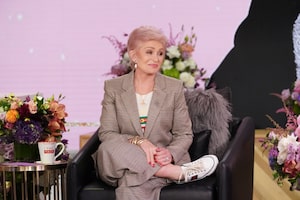 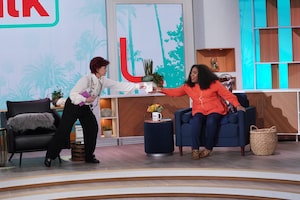