Country star Granger Smith and his wife Amber are going to be parents again!

Amber is pregnant with a baby boy, who is due in August.

Since Amber had her tubes tied after River’s birth, the pair had to overcome the irreversible surgery with in vitro fertilization.

After undergoing IVF, Amber suffered a miscarriage. She told People magazine, “I have had friends who have gone through miscarriages and it's one of those things that until you go through it, you have no idea... what that pain is, not only emotionally, but physically. I had no idea of the pain you go through for hours."

“And sometimes it takes days or weeks," Amber noted. "I just have a whole new respect and compassion for women who experience this. And it's so much more common than we know of."

After Amber became pregnant again, they told their kids London, 9, and Lincoln, 7, who are “so excited.” Amber shared, “Lincoln kisses my belly every morning and always says goodbye whenever he goes to school. London is excited, too, but [Lincoln] just can't wait for a little brother."

The couple stressed that their unborn baby will not “replace” River, who they say “is very alive in our everyday life.”

The family is set to move into a new home before their son arrives. Granger explained, “We really needed a fresh start. We didn't need to forget anything — we just needed a new change of pace where we're really reestablishing new roots on a new piece of land with some new neighbors, a new grocery store and a new way to work. And getting us out of the rut that it's easy to get into, especially after tragedy, where you start driving the same road and you start thinking the same thoughts and you kind of get sucked into the same path."

Amber elaborated, “We didn't want to stay stuck in our grief where we couldn't grow as people and be the best parents that we can be for London and Lincoln. And while this is, like Granger said, never going to be a replacement, we're doing the best that we can moving forward carrying what we have to carry in this new road that we're walking." 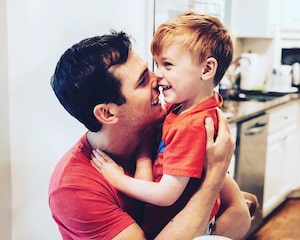 The Smiths will also do what they can to make sure their baby doesn’t feel like he’s living in the shadow of River. Amber noted, “We don't want everyone overshadowing him with River and we don't want him to grow up ever feeling guilty that he's here because River passed away. "So that's going to be a battle that we have to go with."