Actor Joel Kinnaman, 41, and his model girlfriend Kelly Gale, 25, are taking the next step in their relationship!

On Monday, Joel announced their engagement on Instagram. Along with posting a pic of the proposal, he wrote, “She said no. Jus kiddin...”

Kelly showed off her engagement ring in a series of kissing pictures. She wrote on Instagram, “Yours forever❤️.”

Months before he popped the question, Kelly paid tribute to Joel on his birthday. She gushed on Instagram, “Happy birthday baby🥳🤴🏼 I love living life with you. 41 looks gooooood🤤👀👀👀👀🤤.”

The two have been dating since early 2019. In October that year, they made their red-carpet debut at the “For All Mankind” premiere in Los Angeles.

Kelly recently revealed the secrets to their relationship in an Instagram Q&A, telling followers, “We love each other and we have a lot of fun together. And we're super honest, respectful, and just communicative.” 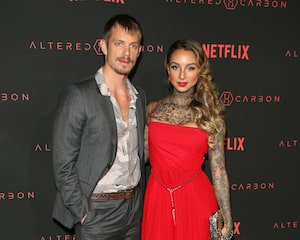 Joel was previously married to Cleo Wattenström, but they called it quits in 2018.